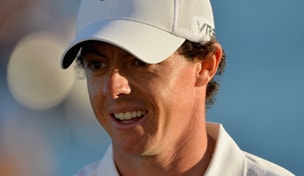 Getty Images
<a href=https://www.instagram.com/p/BAvrkydQbBX/?taken-by=djohnsonpga' target='_blank'>@djohnsonpga</a>: Happy 1st birthday to our son! Love you more than you know. @paulinagretzky  -

This week marks the 16th (and 17th) events of the 2013-14 PGA Tour season, with each of the top 50 players in the world teeing it up in the WGC-Cadillac Championship (our rankings for the Puerto Rico Open can be found here). A field of 69 players will tackle the Blue Monster at Trump Doral, where Gil Hanse has recently renovated one of the longest-tenured venues on Tour.

World No. 1 Tiger Woods returns to defend the title he won last year by two shots over Steve Stricker. Here are 10 players to watch this week outside Miami:

1. Rory McIlroy: Despite his late collapse at the Honda Classic, McIlroy is inching ever closer to the form that won him two majors by the age of 23. The newly-renovated Blue Monster will reward his aggressive play off the tee, and McIlroy has finished inside the top 10 each of the last three years here, including a third-place showing in 2012. The Ulsterman has shown before that he has a short memory when needed, and he could put last week's disappointment behind him quickly with a high finish at Doral.

2. Adam Scott: The Aussie will play alongside Tiger Woods each of the first two rounds, and has his sights set on taking the top spot in the world ranking from him by week's end. Scott quietly notched a tie for 12th at PGA National, shooting par or better in each of his four rounds, and has finished T-6 or better twice in his last three starts at Doral. He continues to try to sharpen his form heading back to Augusta, and should take a significant step in that direction this week.

3. Dustin Johnson: Doral tends to favor those that are both long and aggressive off the tee, and that remains the case after the Hanse alterations. Johnson fits both of those categories and has been playing stellar golf of late, with back-to-back runner-up finishes last month at Pebble Beach and Riviera. He was also a runner-up here in 2011, and tied for 12th just a year ago.

4. Tiger Woods: Sluggish start. Bad back. Woods faces a multitude of questions entering this week, but should he opt to tee it up he remains a player to watch on a course where he has experienced great success in years past. Woods won here in relatively easy fashion last year and his final-round withdrawal in 2012 marks the only time he's finished outside the top 10 since the event moved to Doral.

5. Keegan Bradley: Bradley's T-12 at Honda continued his recent stretch of stellar, albeit unspectacular results. While he's not contending for trophies, he is cashing sizeable checks this year, which makes him a viable fantasy option. Bradley has only made two prior starts at Doral, but he's finished inside the top 10 in both instances - a tie for eighth in 2012, followed by a solo seventh last year. Currently fifth on Tour in total driving.

6. Jason Day: The Aussie enters off a confidence-building win at Dove Mountain, having survived the match-play bracket and risen to No. 4 in the latest rankings as a result. Day has long been a contender in top-tier events against some of the world's best, and tied for second in his 2014 debut at Torrey Pines in January. Dating back to his win at the World Cup in November, Day's results are beginning to catch up to his form - a scary prospect for the other 68 players in this week's field.

7. Sergio Garcia: The Spaniard opened with 72 last week at PGA National, but broke par across each of the final three rounds to nab a tie for eighth. It marked his fourth straight top-11 finish to begin the 2013-14 season, a stat that does not take into account his win in Qatar in January. Garcia has never been higher in the world rankings, and now returns to Miami where he tied for third a year ago. Expect another similar result this time around.

8. Jordan Spieth: Spieth is the only player in this week's rankings who has never played in this event before, but that is a stat that has rarely held the 20-year-old back in the past. Spieth has only finished outside the top 20 once in seven starts this season (a missed cut at the Sony Open), a trend he's likely to continue this week at Doral. Aggressive play and frequent birdies have long been a recipe for success at Doral, and Spieth has been known for both during his tear through the world rankings over the past year.

9. Bubba Watson: Watson nearly caught Justin Rose here in 2012, a precursor to his Masters triumph. Now he returns to Doral just three weeks removed from his win at the Northern Trust Open, his first since donning the green jacket. Watson also nearly won last month in Phoenix, and his run through the match-play bracket was only halted by Victor Dubuisson, the eventual runner-up at Dove Mountain. He's now broken par in six of his last eight competitive rounds on the Blue Monster.

10. Matt Kuchar: Kuchar snapped a streak of three straight top-10 finishes in this event with his T-35 last year, but still clearly has an affinity for south Florida golf. A missed cut at Riviera remains the lone hiccup on his 2013-14 ledger to date, as each of Kuchar's other four starts this season have netted a top-10 finish. He remains one of the most solid players tee-to-green, and should he gain a feel for the greens at Trump Doral could certainly contend this weekend.