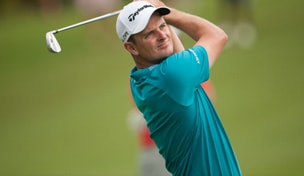 This week marks the fourth week of the PGA Tour's new 2013-14 wraparound season, as the Tour remains in Asia for the second consecutive event with the WGC-HSBC Champions. After a year in nearby Guandong, the event returns this week to Sheshan International Golf Club in Shanghai.

Ian Poulter returns to defend the title he won last year by two strokes over a quartet of players at Mission Hills. Here are 10 players to watch this week in China:

1. Justin Rose: The reigning U.S. Open champion will make his first official start since the Tour Championship on a course where he tied for seventh two years ago. Rose has become one of the more consistent players on Tour, with seven top-10 finishes and 13 top-25s in 17 total starts last season. Having finished second on Tour in scoring average in 2013, there's reason to believe Rose will continue those trends this week in China.

2. Keegan Bradley: Bradley appeared in control at the halfway point in Malaysia but stumbled down the stretch, ultimately finishing 10th. The former PGA champion will look to bounce back this week in China, and with his propensity for birdies is likely to contend once again. Opened with a 65 here in 2011 en route to a T-16 finish.

3. Phil Mickelson: Mickelson had no shortage of sound bites last week, claiming to have essentially lost his swing in the course of a couple weeks. The southpaw still parlayed his 'struggles' into a tie for 19th in Malaysia, despite a final-round 74, and now tees it up at a venue where he won in 2009.

4. Lee Westwood: The Englishman was a runner-up at Sheshan in 2010 and has finished outside the top 10 in this event just once in five starts since 2008. Westwood failed to break 70 en route to a T-24 last week at the BMW Masters but should find considerably more success on the second leg of his China double.

5. Henrik Stenson: The reigning FedEx Cup champion is making his first start since leaving East Lake with a pair of trophies, although injury questions about his wrist make it tough to know what to expect this week. Then again, the Swede's wrist appeared to be injured heading into the Tour Championship and he managed to play decently that week.

6. Graham DeLaet: After a torrid run through the FedEx Cup Playoffs, DeLaet picked up right where he left off with a tie for seventh last week at the CIMB Classic. The Canadian is one of the best ball-strikers on Tour, a trait that should help carry him this week as he makes his first career start in a WGC event.

7. Rory McIlroy: The Ulsterman is slowly showing signs of life, with a solid (if unspectacular) T-27 at the BMW Masters after his runner-up finish in Korea. McIlroy clearly has an affinity for this event, though, with three straight top-five finishes here from 2009-2011.

8. Jordan Spieth: The phenom is making his 2013-14 season debut, having garnered Rookie of the Year honors last season with a win to go along with his eighth-place finish in the final FedEx Cup standings. Regardless of field or continent, Spieth's is a name to watch these days nearly every time he tees it up.

9. Kiradech Aphibarnrat: The Thai was within a spot of the playoff last week in Malaysia and will look to maintain that momentum this week in China. On the cusp of special temporary membership on the PGA Tour, Aphibarnrat has little to lose this week against another strong field as he makes his WGC debut.

10. Martin Kaymer: The German won this event the last time it was held at Sheshan in 2011 and also finished ninth last year at Mission Hills. Kaymer has quietly compiled a solid finish to his 2013 campaign, including three straight top-15 finishes capped by last week's T-13 at the BMW Masters.