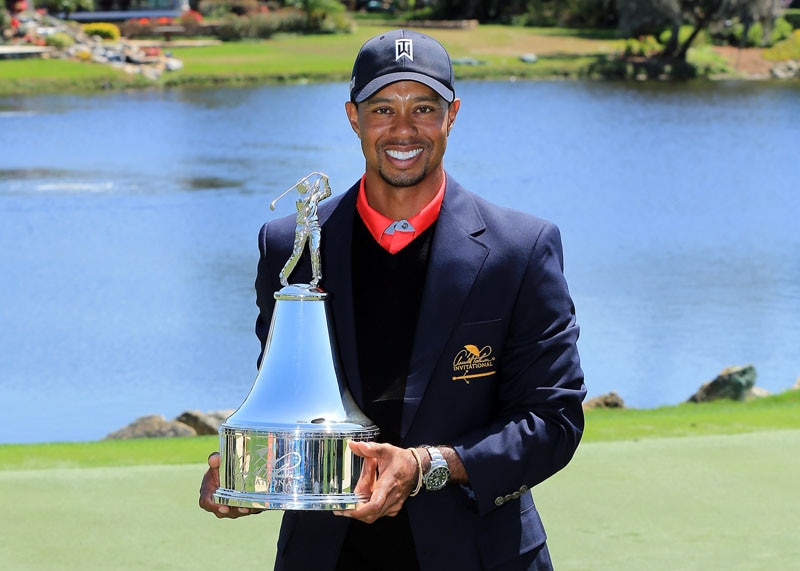 Getty Images
ORLANDO, FL - MARCH 25: Tiger Wodds of the United States proudly holds the trophy the win meant he re-gained the World's number one position after the final round of the 2013 Arnold Palmer Invitational Presented by Mastercard at Bay Hill Golf and Country Club on March 25, 2013 in Orlando, Florida. (Photo by David Cannon/Getty Images)  -

When Tiger Woods finds a tournament that suits him, he dominates it like no player in PGA Tour history. His eight wins at the Arnold Palmer Invitational, all coming at the Bay Hill Club and Lodge in the last 15 years, tie him for the most wins in one event in Tour history with Sam Snead, who won the Greater Greensboro Open eight times, albeit over a span of 27 years. Woods’ usual formula for victory - don’t sweat missing fairways off the tee, and putt the lights out when you reach the green – has suited him well throughout his career. No where more noticably than at Bay Hill. In his four wins since the course was resdesigned before the 2007 tournament, Woods has never been in the top 25 in the field in fairways hit, but he was been in the top five in scrambling three times and strokes gained-putting three times. In 2013 he turned his putting up another notch, making 14 putts from beyond 10 feet, more than anyone has made at the API since 2007. (Editor's note: Woods withdrew from the 2014 Arnold Palmer Invitational on Tuesday with a back injury.)

How Tiger Woods’ ranked in key stats during his wins at the Arnold Palmer Invitational: 2008-2013

But Woods, hampered by a bad back, has been struggling in 2014, especially in the stats that matter most to him. If he had played enough rounds to qualify for a statistical ranking, he’d be 178th in greens hit in regulation, T-83 in birdie average, 17th in strokes gained-putting and 57th in scrambling. Of course, it’s a small sample size. Woods has only played 10 rounds this year, and we’re making matters more noticable by cherry picking specific stats. He would be first on Tour in one-putt percentage, which is more a factor of his missing greens than anything else. But when Tiger came to Bay Hill in 2012 and 2013 he was healthier and playing notably better.

Woods’ accuracy is down, his percentage of greens hit is way down, and although his putting has remained solvent, he is averaging three more strokes per round. He is about 10 feet farther from the hole on approach shots, which means fewer birdie opportunities and more three putts.

So now that Woods has decided not to try for his ninth PGA Tour victory at Bay Hill, who will walk away with the trophy? Here’s a list of players who have had pretty good success at the Arnold Palmer Invitational over the years.

For Stenson and Westwood it’s a chance to make up for lost time in 2014. Stenson has been recovering from a right wrist injury and Westwood has been fighting his swing, having recently split with coach Sean Foley.

Stenson, Rose and Zach Johnson are all ranked in the top-10 in the World Ranking (Second-ranked Adam Scott, who hasn’t played Bay Hill since 2009 is the other top-10 player in the field). While the top-ranked players have had success at Palmer’s place, those ranked immediately behind them in the field have struggled at Bay Hill since the redesign, with the notable exception of 2012.

One final thought: Notice all the European players in the previous two charts. Martin Laird, the 2011 champion, is the only European-born winner of the Arnold Palmer Invitational. However, there have been five European runner-ups since 2005 (Justin Rose in 2013, Graeme McDowell in 2012, Edoardo Molinari in 2010, Greg Owen in 2006 and McDowell again in 2005).