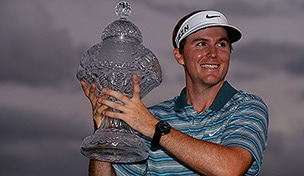 The Bear Trap holes might have garnered all the headlines at the Honda Classic, but the way Russell Henley played the hole before PGA National’s terrible trio was an example of what secured him a second PGA Tour victory. Henley followed his 150-yard hole-out for eagle on the 14th hole Saturday with a chip-in from 37 feet there Sunday. They were two of Henley's four hole-outs for the week, and were examples of the outstanding short game that propelled the 24-year-old Georgian into a four-way playoff with Rory McIlroy, Ryan Palmer and Russell Knox. With dusk approaching, Henley made birdie on the first extra hole to walk away with his first victory of the year. It was an unlikely win for sure. For the last five years, the Honda champion had led (or shared the lead) after three rounds, McIlroy hadn’t blown a 54-hole lead since the 2011 Masters, and Henley himself had gone 20 starts without so much as a top-10 finish. But Henley’s 72 Sunday was enough to catch McIlroy, who shot 74, and causes us to hit the reset button the next time we play “The last time this happened …”

The last five come-from-behind winners at the Honda Classic

Rory McIlroy has held or shared the 54-hole lead nine times in his PGA and European Tour career. He would go on to win five of those events, but he hadn’t lost after holding the 54-hole lead since his unforgettable meltdown at the 2011 Masters. His final-round 74 at PGA National was the result of loose swings Sunday on the 16th and 17th holes, which caused him to make double bogey and bogey, his first over-par scores on the Bear Trap all week. He became the fifth third-round leader in 2014 to shoot 73 or worse in round four. Of those, only Jimmy Walker would go on to win his event.

Rory McIlroy with the 54-hole lead

Henley, meanwhile was stellar when it was least expected. He hadn’t finished better than 27th on the PGA Tour in 2013-14, which, it must be noted, came in the 30-player Hyundai Tournament of Champions. His last top-10 finish came at the 2013 Memorial (T-6). At Honda, Henley excelled at scrambling, a category in which he entered the week ranked T-153 on Tour. He had made par or better only 52.46 percent of the time that he missed the green in regulation, but at PGA National he converted 72 percent of the time, T-9 for the tournament, and much better than any of his playoff competitors.

Henley’s wedge game was special. He had four hole-outs, more than anyone else at the Honda Classic, including the 150-yarder for eagle at No. 14 Saturday that got all the replays. He also chipped in three times from closer than 30 yards; at No. 14 Sunday, No. 17 Saturday and No. 12 Friday. In addition, Henley led the field in proximity to the hole on approaches from 50-125 yards – a distance that none of his hole-outs fall into. Entering the week he ranked T-115 on Tour in this stat, landing his approaches an average of 19 feet, 9 inches from the hole. At the Honda, he almost halved that distance, averaging 10 feet, 7 inches on his six approaches from that range, making birdie on four of them.

Henley joins McIlroy, Patrick Reed and Harris English as current players under age 25 with multiple wins on the PGA Tour.

Wins by players under age 25

The Honda victory gets Henley into the field for this week’s WGC-Cadillac Championship at Doral (as well as the Masters). English, McIlroy and Reed will also be there. We'll see if youth is once again served.