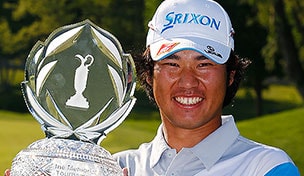 There’s nothing like a birdie on the 18th hole to make you want to come back for more. Hideki Matsuyama sure thinks so. After making birdie on the 18th hole at Muirfield Village during the first three rounds of the Memorial, he came to the last hole Sunday needing another to force a playoff with Kevin Na at 13-under 275. One stroke off the lead after playing the 16th and 17th holes in three over, he broke his driver in disgust after he thought he hit his tee ball into the fairway bunkers. But his ball stayed on the fairway, and he hit the green and made his putt to tie Na. Matsuyama won with a par on the first playoff hole and became the first winner in 2013-14 to birdie the 18th hole in all four rounds. He also became the fifth player to make the Memorial his first PGA Tour victory.

Players whose first PGA Tour win was the Memorial

Matsuyama made eight birdies, six pars and four bogeys or worse in an up-and-down Sunday that still only included 26 putts. He led the field in distance to the pin of approach shots at just 20 feet, 1 inch, including five approaces on the back nine Sunday that were within 10 feet of the hole. For the week his approach shots averaged 25 feet from the flagstick.

Memorial leaders in proximity to the hole of approach shot

Matsuyama was so laser sharp with his approaches that he won despite having a negative value in strokes gained/putting, losing -0.026 strokes to the field for the week on the greens. He is one of three winners in 2013-14 to have a negative strokes gained average, although it should be noted that during Jimmy Walker’s win at the AT&T Pebble Beach National Pro-Am only one of the three courses was measured by lasers.

Matsuyama is also one of six players in the last five years to shoot four rounds of 70 or lower during the Memorial at Murifield Village. The 22-year-old Japanese star had rounds of 70-67-69-69—275 at Jack Nicklaus’ pride and joy. Four of the six players went on to win the tournament.

Players with four rounds of 70 or better at Muirfield Village

It was the second runner-up finish of the season for Kevin Na, who completed his final-round 64 long before Matusuyama finished, and almost won the tournament outright while watching the final groups come back to him from a couch on the clubhouse. Earlier this year, Na was second to John Senden at the Valspar Championship. That week he failed to hold the 54-hole lead and shot a final-round 72. This week at Muirfield Village, Na’s 64 was one stroke off the final-round record at the Memorial. Interetingly none of the players who have shot 64 or better in the last round at Muirfield Village won that week.

Lowest final-round scores at the Memorial

Na’s 64 and Rory McIlroy’s opening 63 were among the lowest scores shot at Murifield Village in the last 10 years. They are among nine players to shoot as low as eight under on the par-72 course since 2005. Again, incredibly enough, none of them would win the tournament. The last player to win the Memorial while shooting at least one round of 64 or below was Tiger Woods in 2000 when he shot a second-round 63 and finished at 19-under 269, five strokes better than Ernie Els and Justin Leonard.

The second-place finish was the fifth of Na’s career, and he is one of seven players with multiple runner-up finishes in 2013-14. Of that group only Bubba Watson and Duston Johnson have also won this season.

Players with two second-place finishes in 2013-14