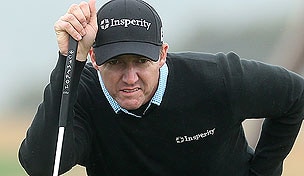 Riviera Country Club, host course of the Northern Trust Open for all but two years since 1973, is one of the quirkiest venues on the PGA Tour. The sixth hole has a two-tiered green with a bunker in the middle, No. 10 is a drivable par-4, and No. 8 sports two fairways. There are plenty of doglegs, tight fairways, small well-guarded greens and few certain birdie opportunities. It has been well-documented that in 2013 Riviera allowed the fewest number of fairways hit since the tour began keeping records more than 20 years ago (51.82 percent), and its percentage of greens hit (58.01 percent) was the third-lowest on tour last year. What kind of player fares well on such a diabolical venue?

Would you believe three-time tour winner in 2013-14 Jimmy Walker? The AT&T Pebble Beach champion calls Riviera one of his favorite courses, and he finished T16 in L.A. a year ago after finishing T-4 in 2011 and 2012. Never one to worry about hitting fairways - he was last in the field in driving accuracy when he won the Frys.com Open to begin his amazing run last fall - Walker’s is one of the better records at Riviera. Since 2006 he has shot only one round worse than 72 and 13 of his last 24 rounds have been under par.

But like Br’er Rabbit in the briar patch, there are other players who are at home on the par-71 venue. Four players in this year’s field - including Walker - have finished in the top-five at the Northern Trust Open two times in the last five years.

Three players have appeared eight or more times at the Northern Trust Open and have never missed the cut.

Five players who have won this event in the last 10 years are in the field. But unlike Haas, not all of them have done much beyond their victory

The up-and-down nature of the recent winners make picking a champion this week dicey. If you had John Merrick a year ago after he hadn’t finished better than T-54 in any previous start at Riviera, congratulations. Also, I don’t believe you. Merrick took advantage of what was given him a year ago. He was T-23 in the field in greens in regulation by sticking his approach shots (T-11 in proximity to hole), and he got up and down when he missed the green (19th in scrambling). It’s a formula for victory on any course, but especially Riviera, where the five best finishers in 2013 were in the top 25 in the field in GIR, scrambling and strokes gained/putting.

Webb Simpson has only played the Northern Trust Open twice, but he too, has a record to admire. He was T-15 in 2010 and T-6 a year ago and according to the PGA Tour’s Northern Trust Open media guide, he is the all-time scoring leader at Riviera, averaging 69.00 in his eight rounds there. Seven other players in the top-20 in all-time scoring at the tournament are in the field this week.

During this wrap-around season it’s easy to forget that Simpson’s 2013-14 victory came in the fall at Las Vegas. Still he’s had a good Pacific swing. Like Walker, who also won in the fall, Simpson has been one of the tour’s top players since January. In fact, there are 14 players with three or more top-25 finishes on Tour during the past six weeks, and nine of them are playing the Northern Trust Open.

Perez has been one of the most consistent players on tour in 2014, and if you’re thinking about picking him in a fantasy league this week, he does have some success at the Northern Trust. Making his 13th start, he has made 10 cuts with a solo eighth in 2007 as his best showing.

Adding sparkle to the Northern Trust is the host of European Tour golfers or dual-tour golfers who have made their way to America and are playing this week as a run-up to the WGC-Accenture Match Play Championship. Some have played well in foreign lands this winter, some not so well, and some not at all. But their presence gives the Northern Trust Open 26 of the top 50 players on the World Ranking. With a projected strength of field of 434 points, it is the best-rated tournament in 2014 according to the standards set by the World Ranking.