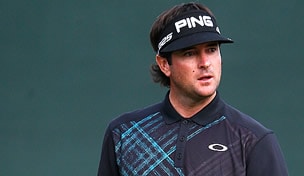 Getty Images
“I still can’t believe what just happened,” - Kim, through a translator, in her post-tournament news conference after chipping in to force a playoff and then holing out for eagle to win the playoff.  -

We should get used to the what we saw Sunday during the final round of the Northern Trust Open. It has all the ingredients of becoming one of the top rivalries on the PGA Tour. The right-handed bomber who has won at least once in each of his seven years in the big leagues against the left-handed slugger who won the 2012 Masters and led the Tour in driving distance four times in the last eight years. Dustin Johnson and Bubba Watson epitomize the new breed of PGA Tour star – long off the tee, tall as the trees, cool under pressure, and as much of an athlete as any of the basketball stars who dunked the night away at the NBA All-Star Game. Although they didn’t quite play one-on-one in the final round at Hogan’s Alley, the pair were certainly aware of each other’s presence on the leaderboard, and Watson’s two-stroke win over Johnson marks the fourth time in five years the two have finished in the top five at the same PGA Tour event.

Bubba Watson and Dustin Johnson in contention at the same event

Watson led the Northern Trust Open in driving distance - the official stat, not the distance of all drives - marking the fourth straight week either he or Johnson has led the field in that statistic. Watson leads the circuit in driving distance at 320.8 yards in 2013-14 and hammered 18 drives longer than that at Riviera. Johnson was eighth in distance at the NTO at a pedestrian 303.3 yards per poke, but he led the field in greens in regulation, hitting 53, two more than Watson, who was third on the week. However, Johnson’s weekend rounds of 69-66 couldn’t match Bubba’s spectacular bogey-free 64-64, the lowest weekend total at the Northern Trust Open since the tournament returned to Riviera in 1973.

Lowest final 36 holes at the Northern Trust Open since 1973

Watson wasn't just the first player with two weekend rounds of 65 or better at Riviera, he was only the fourth player since 1990 to shoot at least two rounds that low in the same week at the Northern Trust Open. Three of the four would go on to win.

But Riviera CC was far from a pushover. Of the 18 courses the PGA Tour has played in 2013-14, it ranks as the sixth-toughest behind Torrey Pines' South Course, the Seaside Course at Sea Island Resort and the three venues used during the AT&T Pebble Beach National Pro-Am.

Johnson, meanwhile, finished second for the second consecutive week on Tour. He shot a closing 66 at Pebble Beach a week ago to finish one stroke back of Jimmy Walker. He’s one of eight players to finish second on consecutive weeks in the last 10 years.

It’s worth noting that not only did Snedeker win in his next start the following week at the 2013 AT&T Pebble Beach National Pro-Am, but Mickelson, too, stayed hot despite the missed cut at the Greenbrier Classic. Lefty won in his next two tournaments at the European Tour’s Barclay’s Scottish Open and the Open Championship. That’s food for thought as Johnson plays this week’s WGC-Accenture Match Play Championship. Unless, of course, he runs into Bubba Watson somewhere along the way.