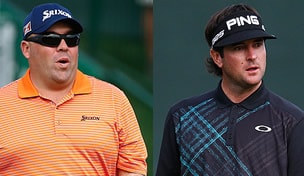 It was a day of firsts Sunday the Waste Management Phoenix Open. Kevin Stadler won his first PGA Tour event in his 239th start. Which means that Kevin and his father, Craig, are set to become the first father-son duo to compete in the same Masters. Stadler was also the first player in 2013-14 to finish in the top 10 in the field in greens in regulation and fairways hit in the same week that he won – and he is very likely the first person to win despite getting his ball stuck on a cactus, on the 11th hole of the final round.

Father-son winners on the PGA Tour

Five members of that group – the Boroses, the Geibergers, the Haases, the Haefners and the Kirkwoods – are among the 11 father-son combos to play in the Masters, and the Stadlers would join them. The Kirkwoods came the closest to playing in the same year, with the elder Joe playing his final Masters in 1948 and junior playing for the first time in 1949.

Young Stadler’s victory was not so much unexpected – Bubba Watson’s short missed putt on 18 Sunday notwithstanding – as it was overdue. Only four golfers who had played in a PGA Tour event this season have played more without a victory than Stadler.

Most starts by an active PGA Tour player without a victory*

Stadler was T-10 in fairways hit and greens in regulation at TPC Scottsdale. He was also fifth in approach-shot proximity to the hole and T-5 in scrambling. He has fared exceptionally well in all four of those categories this season.

Stadler’s stats last week and for the year

Stadler was the sixth consecutive Phoenix Open winner to finish in the top 10 in the field in greens in regulation.

Past WMPO winners rank in GIR

This marks the second consecutive year that Stadler has shot four rounds in the 60s at TPC Scottsdale. His T-11 finish in 2013 was by far his best in this event prior to this year.

The Masters isn’t the only tournament the victory gets Stadler into for the first time. The win moves him from 127th to 57th on the world ranking and secures his spot in the WGC-Accenture Match Play Championship for the first time. The top 64 players on the world ranking after this week’s AT&T Pebble Beach National Pro-Am will advance, and if Rory McIlroy, Tiger Woods, Phil Mickelson and Adam Scott all withdraw, as expected, the next four players will also qualify. Here’s who is on the bubble for the Match Play after the Phoenix Open.

Bubba Watson, meanwhile, lost despite holding the 54-hole lead for the sixth time in seven tries.

Watson with the 54-hole lead

Watson didn’t miss a putt from less than 5 feet at TPC Scottsdale, but was only seven of 12 from 5-7 feet, including his miss on the 72nd hole that would have forced a playoff with Stadler. Watson made 13 of 24 putts from 5-10 feet for the week, ranking 46th among players who made the cut. However, that is a slightly better percentage than Watson has for the season, his 47.22 percentage ranking 143rd on Tour. Stadler, who survived despite his own miss from that range on the last hole, made 10 of 14 putts from 5-10 feet and was 11th in the field for the week and 25th on Tour in 2013-14.