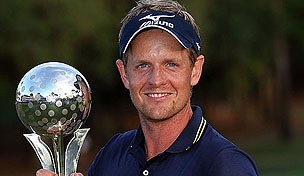 Getty Images
DORAL, FL - MARCH 11: Oliver Wilson of England waits with his caddie during the first round of the 2010 WGC-CA Championship at the TPC Blue Monster at Doral on March 11, 2010 in Doral, Florida. (Photo by Scott Halleran/Getty Images)  -

For Luke Donald, the Valspar Championship can’t come at a better time. The former weorld No. 1 has dropped to 25th in the world ranking and is currently outside qualification for the European Ryder Cup team. Although he hasn’t missed any cuts since the PGA Championship, he has only one top-10 finish worldwide in 2014. This week the Copperhead Course at Innisbrook, where he won in 2012, provides him a great opportunity to boost his rankings. Overall, eight Europeans in the top 50 in the world ranking are outside Ryder Cup qualification. With majors and other big events looming, it’s time to start the process of getting on the team. Like Donald, Justin Rose and Jonas Blixt are in the field this week.

The automatic qualifiers for the European team is made up of the top four players on the European Tour points list (currently Victor Dubuisson, Jamie Donaldson, Thomas Bjorn and Ian Poulter) and the next five top finishers in the world ranking points list (Henrik Stenson, Sergio Garcia, Rory McIlroy, Stephen Gallacher and Joost Luiten). Of the players in this week’s field, Donald stands the best chance of gaining ground. He’s finished in the top-10 three times since he put Tampa back on his schedule, and in 2012 he made birdie on the first hole of a playoff to beat Robert Garrigus, Jim Furyk and Sang-moon Bae.

Luke Donald at the Valspar Championship

Donald has played only one round over par at the Copperhead Course since 2010. Of players with at least eight rounds, only Jim Furyk has a better percentage of rounds at par or better at Tampa in that span. It’s worth mentioning that the par-71 Copperhead course played to an average of 72.222 in 2013, although it played to a subpar scoring average in 2012 and 2011.

Top performers at the Valspar Championship

When Kevin Streelman won the Honda Classic in 2013, he was third in strokes gained-putting, and T-11 in fairways hit and greens in regulation. He was seven strokes back of leader Shawn Stefani after two rounds and shot 65-67 on the weekend to win by two. He was T-31 after two rounds. That’s the third-best comeback after two rounds for a PGA Tour winner since 2012.

The third-round 65 was out of the ordinary for Streelman, who is T-152 on Tour in third-round scoring in 2014 and was T-72 a year ago. He was in the 60s in the third round six times in 2013 after making 18 cuts. In addition, his weekend total of 132 at Tampa matched the best mark in tournament history.

The last six winners of the Valspar Championship have finished in the top 10 in strokes gained-putting for the week. Of that group, only Donald in 2011 would finish in the top 25 in strokes gained for that season. The improvement on the greens during Tampa week, especially for 2008 winner Sean O’Hair and 2011 winner Gary Woodland, is notable.

One final thought: Three players in the field this week finished in the top 25 in strokes gained-putting at Tampa in each of the last two years, but have been outside the top 25 in that stat on Tour since 2012. They are K.J Choi, Stewart Cink and Jerry Kelly. Choi is one of two players who has won this event twice, and Cink was T-2 in 2008 and T-3 in 2005. Kelly’s best finish at Tampa was a T-13 in 2010.