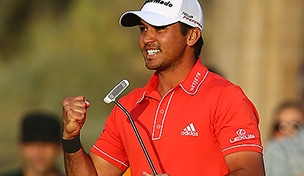 If Jason Day’s thrilling extra-hole victory in the WGC-Accenture Match Play Championship was indeed the tournament’s last appearance in the Tucson, Ariz., area, the Australian and runner-up Victor Dubuisson sure gave Dove Mountain a sendoff that will be remembered. In the first championship match to go to overtime since the inaugural Match Play event in 1999, Day outlasted Dubuission in 23 holes Sunday to become the winningest player – percentage-wise – in Match Play history and the fifth Aussie to win a World Golf Championship title. Dubuisson continued his remarkable climb on the world ranking, can take Special Temporary Membership on the PGA Tour for the rest of the year, and almost certainly took the lead in a statistic that the infinite ShotLink database does not calculate. You know the one, proximity to the hole on chip shots from cactus with rocks, sand, twigs, television cables and six-inch rough between the ball and the hole.

Day’s victory gives him a 14-3 record in four Match Play appearances. His .824 winning percentage allows him to overtake Matt Kuchar as the tournament’s winningest player with 15 or more matches.

Day built upon his success in the 2013 Match Play touranment. He finished third a year ago, losing to eventual champ Matt Kuchar in the semifinals before beating Ian Poulter in the consolation match. Day is the seventh player to play six matches in the tournament two years in a row and the first to go from consolation winner to tournament champion in back-to-back years.

Day is the first Australian to win a World Golf Championship event since Adam Scott won the 2011 WGC-Bridgestone Invitational.

Scott and Ogilvy have also won major championships, and although Day has an enviable major-championship record – three runner-up finishes in his last 11 major starts – a victory in a 2014 major is far from certain. In the last 10 years only two Match Play champions would go on to win a major in the same season.

Day’s victory Sunday also moved him to third on the final West Coast Swing money list for 2014, trailing Jimmy Walker and Bubba Watson. Day earned more than $1.5 million at Dove Mountain and supplemented that with a $366,000 check for his T-2 finish at the Farmers Insurance Open.

Dubuisson, with his more than $1 million on the PGA Tour in 2013-14, can accept Special Temporary Membership on the PGA Tour for the rest of the year. That means he can take unlimited sponsor exemptions. He is already exempt into the major championships and is now 23rd on the world ranking, a remarkable climb from 259th, his position on the ranking a little more than two years ago.

In additon to the majors, Dubuisson is exempt into the WGC-Cadillac Championship at Doral in two weeks, where he’ll get another chance at Jason Day and the rest of the world’s best players. The good thing is, last time we checked, Donald Trump hadn’t planted any cactus on the recently renovated Blue Monster course.