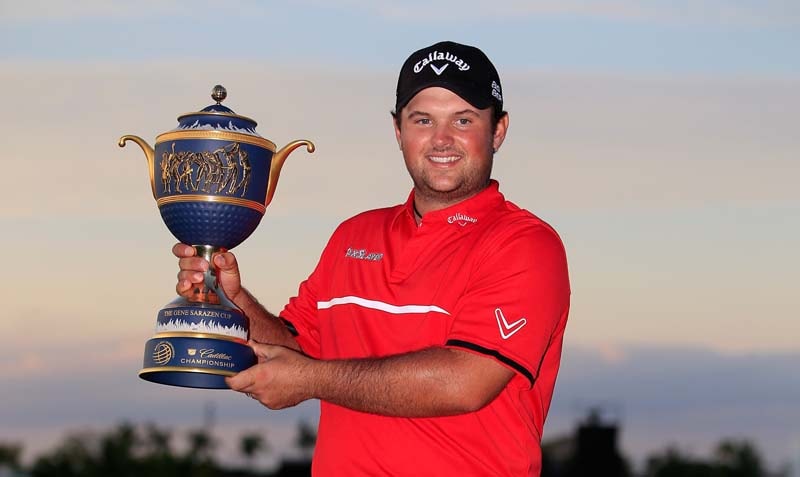 Getty Images
Patrick Reed celebrates with the Gene Sarazen Cup after his one-stroke victory during the final round of the World Golf Championships-Cadillac Championship at Trump National Doral on March 9, 2014 in Doral, Florida. (Photo by Jamie Squire/Getty Images)  -

If you don’t think there’s a youth movement on the PGA Tour you haven’t been paying attention. For the second straight week a PGA Tour winner is under 25, with 23-year-old Patrick Reed winning the WGC-Cadillac Championship to join 24-year-old Honda Classic champ Russell Henley. Throw in Chesson Hadley, who won Sunday’s Puerto Rico Open, and Jason Day, who ended the West Coast Swing by winning the WGC-Accenture Match Play Championship, and the last four winners are all 26 or under. Of the 17 PGA Tour events in 2013-14, 10 have been won by players under 30.

Reed, now 20th on the world ranking, joins Rory McIlroy as the only PGA Tour players currently under 25 with three or more wins. He is the first player since McIlroy to win twice in the same season at such a young age. When McIlroy won four times in 2012 he turned 23 in May. Reed turns 24 in August.

Wins by players under age 25

The victory gives Reed three wins in 51 PGA Tour starts, which is in line with when some of the Tour’s biggest stars got their third victory.

Reed successfully challenged the revamped Blue Monster course at Trump National Doral, which played to a scoring average of 73.852 and was the toughest course in relation to par the Tour has played in 2013-14.

To be sure, Gil Hanse restored the Blue Monster’s bite, as the course played to a subpar scoring average each of the last six years. It has not been among the 20 toughest courses on the PGA Tour since 2007.

At Doral, Reed wasn’t very accurate off the tee (T-52 at 41.07 percent) and was only about tournament average in greens in regulation (58.33 percent), but he rebounded when he missed the green, improving on his season average in scrambling and sand saves percentage, finishing in the top 10 in both stats for the week. He made par or better two out of every three times he missed the green (the tournament average was about 50 percent) and was eighth in the field in sand saves, getting up and down 10 times in 14 tries from bunkers, including three on the back nine Sunday.

Key stats for Patrick Reed at Doral and entering the week

What’s next for Reed, now that he has made mincemeat of the tour’s easiest venues – the desert courses at the Humana Challenge, where he shot 28-under 260 in January – and the Tour’s hardest test so far this season? How about a major championship? Even though Reed hasn’t played a major in his career, next month’s Masters will be a homecomeing for him as he played college golf at Augusta State. Can he succeed? Maybe not next month, maybe not in June, but someday and for the rest of his life, he’ll likely be able to call himself a major winner. Look again at that list of PGA Tour winners a few charts up. Only Garcia and Dustin Johnson haven’t won a major title, and they’ve both come close. Only one previous WGC-Cadillac winner (Nick Watney) has never won a major. Eleven of the previous 14 winners had already won one and Mike Weir and Justin Rose would eventually do so. Yes, the future looks bright for one of the Tour’s top young stars.