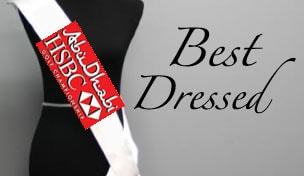 The best players on the planet teed it up a world away last week in Abu Dhabi and in case you were sleeping through the action, here's a look at the best fashions from the week.

Tiger Woods: OK, so it's the same red shirt, black pants, black hat and black shoes we're used to seeing Tiger Woods wear on Sundays. The reason it makes the best dressed list this week has less to do with the outfit and more to do with the smile on his face and the grace with which he accepted defeat. After his even-par 72 Sunday that left him T-3 for his 2012 debut, Woods delivered a thoughtful and eloquent post-round interview. When asked to comment on playing partner Robert Rock, he was very complimentary, congratulatory and humble. Call me crazy but I don't remember the last time we saw Tiger Woods lose a tournament and be so content with himself or the outcome. Woods seemed more at peace with this loss; more accepting of his progress and the process and as you can see by the above photo ... he displayed the greatest fashion accessory of all ... a genuine smile.

Robert Rock: Robert Rock secured the Abu Dhabi victory for his second professional win and not only did he top five of the world's top-10 players, he did so playing alongside Tiger Woods Sunday. Rock joins the small fraternity of players who have ever beaten Woods if he held or was tied for the lead through 54 holes. Only Y.E. Yang at the 2009 PGA Championship and Graeme McDowell at the 2010 Chevron World Challenge had accomplished the feat before Rock. Rock was self-admittedly star-struck at the prospect of teeing off alongside Woods, calling him “the best guy I’ve ever seen play golf.” Couple his composure on Sunday with his classic and simple pairing of gray and black, the 'Rock Star' logo on his shirt and the splash of lime green on the inside panel of his collar, and we've got ourselves the Paul McCartney of English golf. And with hair like that, who needs a hat?

Luke Donald: The World No. 1 may not have stacked up to the former world No. 1 – or Rock who ranked 117 last week – but he at least looked good en route to his T-48 finish in Abu Dhabi. Call me a sucker for the classic and clean look, but Donald's gray, white and black looked sharp, professional and what we'd hope the No. 1 golfer in the world would look like. Donald sported this in the second round where he averaged 20 yards further than any of the other three days in Abu Dhabi and shot an even-par 72. This look is par for the fashion course and I hope he sports more of the same the rest of this season.