Best Dressed: Glitz and glam at the NTO 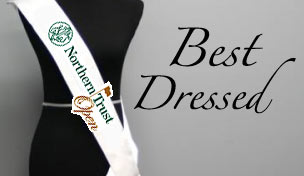 Amidst the glitz and glam of Hollywood, the Northern Trust Open delivered us an ending that only L.A. could script. Bill Haas may have hoisted the trophy by night's end, but all three playoff participants proved their worth in golf and in this week's Best Dressed list.

Phil Mickelson: The left-hander had us all on the edge of our seats; all hopeful and energized at the thought of back-to-back wins. He held or shared the lead through the first three rounds but couldn’t get it done Sunday. He took us on the rollercoaster that is Phil but left us short-changed when Haas’ final putt dropped. We enjoyed the show and the past two weeks proved that Phil keeps us coming back for more.

Bill Haas: He may not have – literally – made a splash in the Northern Trust playoff quite like he did when he defeated Hunter Mahan last fall at East Lake for the Tour Championship and FedEx Cup titles, but Haas’ performance at Riviera was equally suspenseful. Staring down two major champions is no small task, but Haas pulled it off while remaining calm, cool and collected. The perfect fit for his fourth PGA Tour win.

Keegan Bradley: If Keegan Bradley proved one thing with his performance Sunday at the Northern Trust Open, it’s that this 25-year-old is settling in for a long and successful career on Tour. When he needed to match the birdie putt Phil Mickelson had just drained before him to get into a playoff with Lefty and Bill Haas, Bradley sunk his putt with an ease we’re used to seeing some other red-shirted individual do late on Sundays. If he keeps going at this rate, he’ll find a style all his own that likely includes trophies come Sunday night.