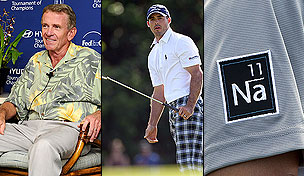 It’s no small task getting out of the holiday mode and diving directly into the 2012 PGA Tour season. But if players must be coaxed to leave their fireplaces, families and favorite new toys, there’s no greater incentive than an island escape.

Some Tour players took their season-opening wardrobes seriously while one PGA Tour suit decided to let loose in Maui. Here’s a look at the week’s best dressed from the Hyundai Tournament of Champions.

Commissioner Tim Finchem: You’ve got to give the man credit. We’re used to seeing him in suits, ties and – ever since Tiger Woods’ Thanksgiving incident – a somber and sullen look on his face. His attire at the season opener showed the players, fans, and sponsors he can let loose and well, hang ten.

Jonathan Byrd: The defending TOC champion must have flown over in business class – because he brought both with him when he arrived in Maui. He finished T-3 alongside Webb Simpson while looking both poised and composed throughout the week with his golf game and his garb. He may have fell short at his title defense, but in no way does he have to defend his look.

Kevin Na: Kevin Na’s 2011 included a 16 on the par-4 ninth hole of the Valero Texas Open and what many thought was a complete whiff off the 15th tee at the Justin Timberlake Shriners Hospitals for Children Open which he went on to win. So how does a player with some big hiccups and only one PGA Tour win have his name on his clothing? Initiative, ingenuity and entrepreneurship. All three are good by me and are certainly enough to put him on the best dressed list for the Hyundai Tournament of Champions.