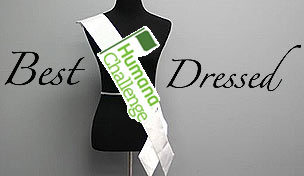 Mark Wilson won his fifth PGA Tour victory Sunday at the Humana Challenge, posting a red-hot 24 under to take the title by two. While there were plenty of red numbers displayed on the Humana Challenge leaderboards, it was the men sporting black and white who won honors for this week's best dressed.

Bill Clinton: At 65 years old, former President Bill Clinton is a model citizen for his efforts to lead an active and healthy lifestyle both on and off the golf course. We only saw him play nine holes at the Humana Challenge on Saturday alongside Greg Norman due to dangerous wind gusts that suspended play, but nine holes was all it took to land him on this week’s best dressed list. President Clinton is fighting a great cause – childhood obesity – has lost 24 pounds and became vegan after heart surgery in 2004. This former White House occupant knows how to take up residence in an all black outfit that’s both slimming and stylish.

Greg Norman: Greg Norman made his first PGA Tour appearance since the Shell Houston Open in 2009 at last week's Humana Challenge and although he withdrew after his Saturday round was cut short by wind gusts up to 50 mph, you can't deny Norman's style and grace when he tees it up. He sported his classic Shark look and with a size 32 waistline – the same size he's been for 30 years – Norman is sure to make a splash on the fashion scene wherever he goes.

Camilo Villegas: Camilo Villegas has always been one of the fittest, most stylish pros on Tour, but at this week’s Humana Challenge, his new belly putter and his first-round 63 added to the already lean and limber Colombian’s look. Making his first ever appearance at the La Quinta stop, he finished T-19 after sharing the first-round lead with David Toms. If he keeps in tune with the putter and the chic pairing of black and white, he’ll likely go far in the 2012 season.