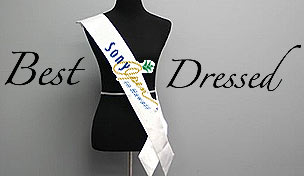 Johnson Wagner won the Sony Open with a fashion statement worthy of its own category, but beyond Wagner's 'stache – which you couldn’t miss – there were plenty of other players setting fashion standards worth taking notice.

Bud Cauley: Kids these days. They think they’re know-it-alls and if you don’t believe me, just ask them. When Bud Cauley decided to forfeit his senior season at Alabama to turn professional, some may have shook their heads in disbelief. But believe it or not, Bud Cauley, 21, may actually know what he’s doing. He made the cut in seven of the eight Tour events he played in 2011 and jumpstarted 2012 with a T-29 at Waialae Country Club. Much like his entry onto the Tour, his wardrobe mirrors his playing style. The plaid pants and white polo exhibit his youth and independence from other 20-somethings his age, yet he’s not screaming ‘Look at me!’ His game and his style do the talking.