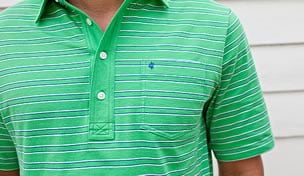 I’m a simple man. Most will agree with that; though, they may argue the definition of ‘simple'. I don’t have overly expensive tastes and don’t require excess. I like what I like and I’m fine with that.

I’ve managed to do pretty well in accumulating things that I like – things that fit me: my glasses, my watch, my Hogan irons, the one pair of shoes I wear every day.

There was, however, one thing missing for a very long time: a decent golf shirt.

But I finally found a golf shirt that not only I like, but seems to be gathering in overall popularity as well.

They are made by a start-up company called Criquet, co-founded by lifelong friends Billy Nachman and Hobson Brown.

Someone once said that necessity is the mother of invention – maybe Plato, maybe Frank Zappa. Regardless of attribution, the proverbial saying applies to the birth of the organic shirt company.

Nachman and Brown have been wearing collared shirts most of their lives, dating back to their days at an all-boys school in New York City. As the story on their website goes, they sampled various styles throughout adolescence and young adulthood, only finding a level of comfort and pleasure in '70s-style, hand-me-down polos – the kind with the pronounced collar and polyester feel, the kind you might have seen Dean Martin wear while drinking scotch in a clubhouse or even Jack Nicklaus when he won the ’86 Masters.

Over time, however, these shirts faded from mass production and out of public consumption. They gave way to thicker cotton varieties, garishness and eventually moisture-wicking technology.

Then one day in 2010 while lamenting the loss of favorite shirts and an inability to find anything to their liking on the current market, they decided to be pro-active. If they couldn’t buy them, they would make them.

“We always wanted to work together,” Brown said. “We’ve always been passionate about two things: golf and our shirts.”

Nachman’s family had an apparel background. Combining their creativity and an understanding of exactly what they wanted in a shirt, they created the Criquet line, which they describe as “old-school preppy with a splash of hipster.”

“These shirts are for the guy who likes to step out of the standard realm of attire,” Nachman said. “The kind where you can leave the golf course and not have to change shirts – go straight from the 18th hole to the 19th hole, or wherever.”

Added Brown, “We weren’t looking to create a super-high performance shirt, that wasn’t our goal. We were focused on comfort and style.”

The men’s Players line offers a four-button placket with a tabbed collar and left-chested pocket. They come in shades of blue, green, white, navy and red. There are also black walnut and grey offerings in the pique shirts.

“We’re coming out with new shirts, even lighter (in weight) and super comfortable, good for sweaty days,” said Brown. “We will also have some more summer colors with pink and light blue, as well as a long-sleeve shirt for fall and winter.”

The two men began the grass-roots promotion of their shirts, which are composed of organic cotton, online. They have since ventured out into the social media market, made connections with other small brand clothes manufacturers, and shopped their wares at clubs and tournaments.

They were even featured in Playboy as Playmate of the Year Lizzy Jagger sported their line.

But, as Nachman said, “What has helped the most is word of mouth.

“The feedback has been great. We are really pleased. People seem to love this kind of shirt.”

Count me among them. I have a blue Players shirt and a green Thin Stripe Players shirt. I have worn them on the golf course, on Bourbon Street and at my kids’ birthday party. I have approximately 10 polo-style shirts in my closet. I only wear two of them. I like what I like.

Despite the Orlando heat, the shirts are plenty comfortable to wear during a round, and despite numerous washings, they have maintained their color. They have a slim fit, but are far from restrictive.

The Perfect Pique retails for $55, The Players $60 and the striped varieties $65. For a guy who shops off the clearance rack at Target and in thrift stores, they are a little above my normal price range, but when you find something you really like, you have to ante up – and based on prices of the modern, popular golf shirts, these are a bargain.

Good fashion is subjective. Some may like “dry” technology, vented sides, electric colors and off-center designs. But give me something classic. Something comfortable. Something simple. Something that I can wear out in public and not look like a complete tool.

I won't go as far as Patrick Henry, but give me Criquet.