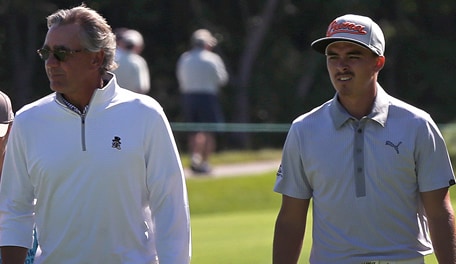 Sometimes you have to reeducate yourself, just go back to school to learn what you’ve forgotten and realize that your fellow competitor has a firmer grasp on the subject and keeps producing higher marks.

Thus is the dilemma of the U.S. Ryder Cup culture. The agent for change and an encouraging future may lie in the mind of an individual who was nurtured in a culture of learning. More on that game-changer in a moment.

First, how did we get here, both the USA and Europe?

Many factors have contributed, some tangible, others intangible. However, the intangibles may be more impactful than the world rankings of the top European players starting to mirror those of the Yanks on a more consistent basis.

Lets start with the "systems," which is the most palpable component to why many think one side cares more than the other. It’s insulting to think the Americans don’t try or don’t care, and that the Europeans care more. But one side has more pride in the success of the team – it’s not about the flag; it’s about roots and soul.

The European Tour owns the property on its side and the Ryder Cup is its crown jewel. Every player is a product of the system. Of course, its biggest stars make the lion’s share of their wealth on the PGA Tour – that's not a slight or a turning of the back to where they came from. The reality is, that America provides the best fields, most money, most world ranking points and is home to three of the four majors.

Rory McIlroy, Justin Rose, Graeme McDowell, Henrik Stenson, Lee Westwood and Sergio Garcia have not forgotten where they came from. On the contrary, they take pride in their origins and that it gave them the launching point for their wealth and place in the game. Yet, every two years they essentially get to leave their lives as de facto NBA superstars to put on their high school jerseys with the boys they grew up with and take on an American all-star team.

But more importantly, they are being guided by the guys from the neighborhood, European Tour brethren who never forgot where they came from and remain the soul of the system. Their pride in winning the cup for their respective nations is matched by their pride in the tour of which they are all a product.

Herein lies the disconnect – the European players are invested because they have a voice; their fraternity runs the tour and decides who leads the team.

The PGA of America is an admirable organization and I'm proud to say that as a former class-A member. But the association doesn't have the emotional and intellectual connection with the U.S. players charged with pursuing the cup because, while they're trying to grow the game, the players bi-annually representing the U.S. on its behalf are trying to win tournaments. The players don’t have any investment in the culture of the Ryder Cup until they are part of the team. Only then it's a formalized meet and greet while Europe descends on a Ryder Cup site having made every choice together in a unified systemic fashion that determines a resume based on the collective cause, not whether you won a major.

Now for the solution. It requires vision, commitment, concessions, and one who sees the viewpoint of all parties while being strong in his positions, but sensible enough to listen and be educated while teaching. The individual who should lead USA Golf is an accomplished businessman, but equally as important, he's a golf insider with relationships at every level. Seth Waugh is the answer.

The son of an English teacher at the Lawrenceville School in New Jersey and one of five sons, he had a choice to coach and teach or enter the business world. Either would have been fulfilling but Waugh ascended to the CEO position of Deutsche Bank in 2000. His rise was met with great success for his company and he chose golf as an investment in the branding of the company he was running. Along the way he earned the universal trust and respect of every key figure in golf – player, administrator, commissioner, sponsor and governing body.

His name was strongly kicked around as the successor to PGA Tour commissioner Tim Finchem. Waugh left his post at Deutsche Bank not because he was burned out, but because he wanted to invest in his son's four-year journey through college golf at Wake Forest – caddying for him in summer events and taking the time to reset the pins on his next passion. I've found that project, CEO of USA Golf.

Waugh knows the AJGA system, the college system, the PGA Tour culture and has the cache and humility to bridge the gap between the PGA of America and the Tour to navigate and negotiate concessions on both sides to find a common goal. Waugh has the ability to create golf events at the junior, scholastic, collegiate and professional levels to instill common goals, while making the U.S. side stronger in international team competitions while maximizing the marketability of the Tour’s biggest stars.

The PGA of America and the PGA Tour are in a good place and they have a chance to serve each other’s best interests by creating a position that will be the greatest bridge to unity and future success. Waugh should lead the search for future captains while fostering unity among players – letting their voices be heard – and also encouraging the captaining of Junior Ryder Cup teams by players in the U.S. Ryder Cup system. Ten years ago, USA Basketball was at a crossroads with the perception that the world had caught up with them, when in reality it was a concession that the NBA made that they needed a leader to build a new system under the direction of Jerry Colangelo. Big egos listened to each other and USA Basketball has a system that is a classic buy in. The dividends are championships with common purpose.

"When Jerry Colangelo took over, a new program and a new attitude was established, and the results are staggering," ESPN basketball analyst Jay Bilas said. "USA Basketball has won four straight FIBA world titles, which has never been done before, and USA Basketball has won every major title at every level.

"While the sports are different, the idea is the same: to create an environment of team, selfless service to others, and having a 'we first' approach.  We seem to accept that the Europeans do it naturally and we don't. That is a lame rationalization and excuse. We have lost eight of 10. That's a 20-year trend that is far beyond talent or making putts. We can't just say 'play better.' This trend is the result of a losing culture and requires change."

Waugh spent 30 years making the right investment for his various business segments and it’s time for the PGA of America and the PGA Tour to cede some power to a visionary that will serve both entities and pay dividends. Waugh always wanted to coach and teach. If given the chance he can do it in the sport he loves the most. 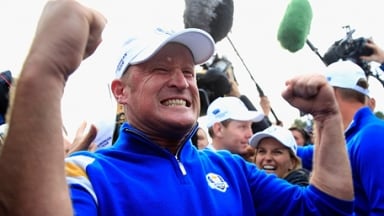 Jamie Donaldson is the most recent tour pro to prove that golfers and chainsaws don't mix. 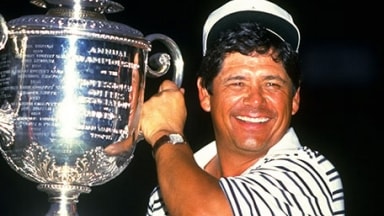 Trevino: Mickelson should have shut up about Watson

t's been five months since Phil Mickelson made his infamous comments about the methods of U.S. Ryder Cup captains, but people are still weighing in. The latest is Lee Trevino. 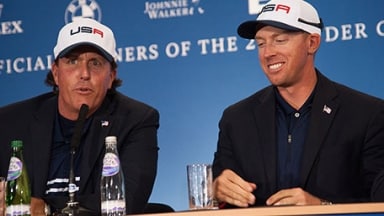 The U.S. Ryder Cup task force has done plenty of talking. Now it's time for it to take some action.