Funk Struggles With Life at 50

By  George White
July 5, 2006 at 12:00 PM
So now its Fred Funk who hits the big 5-0 and tees it up with the gents of the Champions (read that Seniors) Tour. And, as can be expected, Fred says he will still be playing a full regular-tour schedule.

Its totally understandable, by the way. Fred will still be eligible for the regular tour until 2010, since he won The Players Championship last year. The rocking chair will wait for him, of course. Will it have to wait one year? Two years? You can bet your lunch money that the rocker wont have to wait until 2010. Fred will become a Champions Tour member exclusively long before then ' guaranteed.

Fred Funk should be able to thrive on the Champions Tour.
This week Funk et al will play the U.S. Senior Open. It will be his first taste of the senior life. And my guess is that he will find it VERY appealing and very comfortable.

Of course, he still will have to undergo some mental rehabilitation ' he will have to be convinced that he no longer can be a consistent factor on the PGA TOUR. He may be a factor this year, possibly next when he is 51. But after next year ' a year and a half ' he will know on what side of the street he belongs.

It happens to hit just about all of the elders who reach the age of AARP. Jay Haas rebelled and he proved he could still play with the younger set when he was 50. By 51, though, he could see it was time to go gracefully on over. So did Craig Stadler. So is Loren Roberts, etc., etc. The gap is just too wide.

But it is difficult to just walk away from the regular tour after youve had some success in your 40s. For one thing, the money is so good ' four times what the Champions Tour pays. For another, the mind still says that you are just as good as you were five years ago. The body, though, says, Uh-huh. And of course its the body that means business.

Curtis Strange couldnt believe it when it happened to him. The calendar told him it was time to move on. His ego said, No, I can still play REAL golf. But the calendar always wins.

But its hard to let go. I kept thinking last year that if I worked harder and played a little bit better its not that I can compete on the regular tour, dont get me wrong. What Im saying is, its hard to let go. I found myself always kind of looking at the PGA TOUR, trying to keep in touch.

But then eventually after you see the guys out here and youre out here on a day-to-day basis, you get to where this is your life ' vs. the PGA TOUR.

Greg Norman continues to believe the Champions Tour is a bit beneath his playing ability, but his body has accumulated so much wear and tear that he cant play EITHER tour. Tom Kite really felt like he was capable of playing both tours last year at age 55, but he scampered back to the older gents in a hurry this year. Tom Watson made a half-hearted attempt at playing some on both tours when he was in his early 50s, but he never was really serious about trying to keep pace with the young men.

If you feel like you can play, Watson reasons, you still play. By all means, go for it - play both tours. I tried to do both when I first became a senior, but Ive pretty much determined that Id play as many majors as I could and use the senior tour early on to keep me sharp.

The more I played out here ' Im a lot shorter than the kids now. When I first came out here, I still had some comparable length. But the advances of the balls and clubs, and the kids conditioning, their suppleness ' I cant compete on that basis.

One Champions Tour player after another has said basically the same thing. Its really hard to let it go - sure it is, said Watson. But almost everyone who has hit the age 50 threshold has immensely enjoyed his days on the Champions Tour. And so will Fred Funk. He will learn that lesson shortly. There certainly is no harm in wringing every last drop out of the PGA TOUR coffers. But most 50-year-olds are much better placed playing against people their own age.

In Freds case, one reason for the emphasis on the regular tour this year is his determination to make the Ryder Cup team. He says he will only play three times as a senior, the rest on the regular tour as he gives an all-out effort to be on Tom Lehmans U.S. squad.

That goal is admirable. But once it is ' or isnt ' decided, Fred would be well advised to join fulltime in the senior fun. Life on the junior circuit isnt all its cracked up to be when you can be winning on the senior circuit.

Email your thoughts to George White 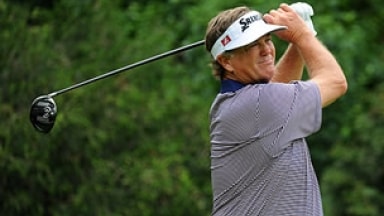 Peter Jacobsen has withdrawn from the U.S. Senior Open in Omaha, Neb., because of heat-related illness. 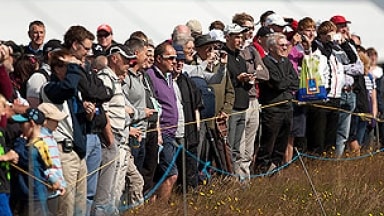 In this week's 'What We Learned,' we learned that Royal Lytham & St. Annes will have a slightly different look than we're used to, that Roger Chapman is a bigger stud than he gets credit for being, and at least one member of our staff is jonesing for the British Open. 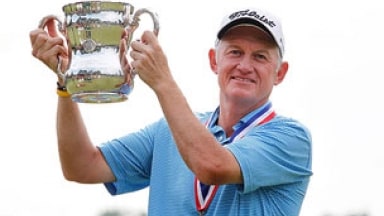 Roger Chapman earned the right to be mentioned in the same sentence with Jack Nicklaus, Gary Player and Hale Irwin. Not bad for a self-described former European Tour journeyman.