Kite Rejuvenated as a Champion

EDMOND, Okla. -- Tom Kite has this persistent quest in mind as he prepares to play in the Senior PGA Championship this week.

Tom Kite has eight Champions Tour titles under his belt.
When he was 50 in the year 2000, he graduated to the Champions Tour and has now won eight times on that circuit. He has earned a place in the World Golf Hall of Fame. But at the age of 56, he doesnt know that he has reached his peak. At the age of 56, he is looking towards tomorrow and the next day as he attempts to be a superior player to that man who won the Open, that led the PGA TOUR in career winnings for so many years.

Im excited about the possibility of getting better, he said energetically. Im excited to see if Ill be better in the future than I am today. I may have already been as good as I am ever going to get. But I dont know that yet. And Im having a great time finding out.

Kite practices what he preaches. He dabbles frequently on the young mens tour, playing half of his schedule on the under-50 circuit last year because he had a one-time exemption as a top-50 money earner. He goes to qualifying every year for the U.S. Open. He is a long, long way from slowing down and acting his age.

Kite played in 12 regular-tour events last year and finished in a tie for 13th in one, the Booz Allen Classic. But he wasnt a rousing success on that tour, and when he reverted to the Champions Tour, he wasnt too effective on that circuit, either. He confesses that he needed to choose one or the other and stick with his decision. Naturally, that choice would be the Champions. And now that he plays the elder circuit almost exclusively, he has played quite well this year.

Actually, hes playing better now than he was as a younger man, about three or four years ago. He had won six times though his first 64 events on the Champions Tour. Then he hit rough sledding, experiencing putting woes and failing to get a victory from October of 2002 until August of 2004. After winning then, he went through another drought, going 19 months until he won this year.

His win at the AT&T Classic this year broke that string of non-victories. And, it was a most welcomed respite. The longer you go without a win, the more difficult it is,' he said with a sigh.

His putting has become much improved since he went to the claw grip, roughly resembling Chris DiMarcos hand position, the last couple of years. Once one of the finest putters in the world in his 20s and 30s, he had gradually gotten worse until, out of desperation, he tried the claw. That was last year, and this year as he got more comfortable with it, he has greatly improved.

'At times out here on the Champions Tour and the last few years on the PGA TOUR, I've kind of fought my putter,' he said. 'But now my putter is getting very, very good. I'm really starting to swing well again so I'm very encouraged and very, very optimistic about what's going to happen over the next year, year and a half.'

This week he tries again, trying to forget about all the miscues and mishaps of last season.

'I played terrible last year,' he said. 'Except for an occasional decent tournament, I really didn't play very well at all. 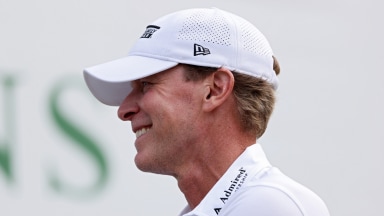