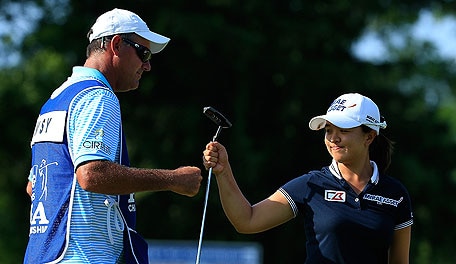 LANCASTER, Pa. – Sei Young Kim started the U.S. Women’s Open sluggishly after learning Wednesday that her regular caddie, Paul Fusco, had been banished from the championship, but she got herself back in the mix Friday.

Using a torrid late run of five consecutive birdies, Kim shot 3-under-par 67, which looked like it might equal the round of the day until Amy Yang and Shiho Oyama came in with 66s at the end of the day.

Kim opened with a 73. She said there was some awkwardness getting used to her substitute caddie, Steve Bybee, in the first round, but she felt better about their connection in the second round. Kim is close to Fusco and says she is staying in touch with him via telephone this week.

“He’s actually cheering for me,” Kim said through a translator.

Kim, 22, an LPGA rookie who is already a proven star in South Korea, has already won twice this year. She’s also proving tough in majors. She was in the final Sunday pairing in the first two majors of the year, taking the 54-hole lead at the ANA Inspiration before tying for fourth. She finished second at the KPMG Championship.

Fusco has been on Kim’s bag since she made it through LPGA Q-School last December, but he was “removed” from the U.S. Women’s Open Wednesday. USGA security confiscated Fusco’s credential and escorted him off the property with USGA officials saying they found him in the rules office taking photos of “internal course setup documents” that would have included hole locations, yardages and plans for alternate tees for all four rounds of the event.

Kim told GolfChannel.com Wednesday that she planned to keep Fusco on her bag in future events.

With Fusco’s help, Kim hired Bybee as her caddie this week.

“The first time, it was a little hard, because we’re not familiar with everything,” Kim said. “It’s getting better.”

Kim birdied the third through seventh holes Friday, playing them on her second nine. She said every birdie putt was from 8 feet or less. She also said she battled her putter early but figured out something in her round.

“I found a key to make birdies,” she said.