After Further Review: Are the changes worth it for Tiger? 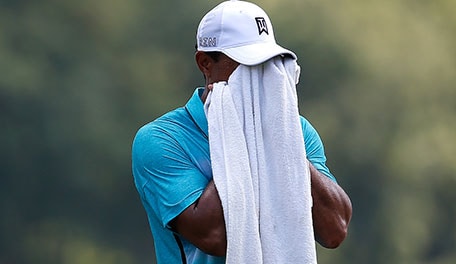 Each week, GolfChannel.com takes a look back at the week in golf. In this edition of After Further Review, our writers weigh in on whether Tiger Woods' swing changes have been worth it, when a major becomes a major, and why underdog stories make sport so entertaining.

Considering where Tiger Woods’s game was earlier this season, three rounds in the 60s at the Quicken Loans National could be considered progress as he heads to the final major of the season. It’s just still shocking the 14-time major champion let his game sink so low in a season where he hasn’t suffered a major injury.

Woods keeps reminding us he’s been here before when he changes his swing, but that’s not exactly true. Woods never posted the awful rounds like he did at Phoenix and the Memorial. Two straight missed cuts at majors? That was a new one. And never has a weekend duffer related so many times to the kind of skulls and duck hooks Woods has hit this season.

Yes, there were a lot of positive signs this week – especially with his driver and putter – and Woods said he’s taking the long view, getting ready for the final chapter of his career and not just this season. But after another week, he still hasn’t answered an important question – were all these changes worth it? - Ryan Reiterman

Just for the sake of argument, let's say Inbee Park doesn't get credit for a career Grand Slam because the Evian Championship, which now is a major, wasn't a major when she won it in 2012. I can see the logic to that argument. But, as Golf Channel's Matt Adams points out in this video, Gene Sarazen gets credit for a career Grand Slam even though the only time he won the Masters was 1935, when the tournament was only two years old and wasn't yet known as the Masters. Was it a "major" that early in its existence? More likely is that Sarazen's "Shot Heard Round the World" albatross, which helped get him into the playoff that he eventually won, combined with the presence of host Bobby Jones to make it a major. But can a tournament become a major retroactively? Just askin'. - Al Tays

Give the power of perseverance a commanding 5-and-4 victory over the quick road to success. Sure those who skyrocket to stardom – the likes of Jordan Spieth and Rory McIlroy – are captivating; but there are few better stories in golf than the journeyman who finally makes good. Stories like Troy Merritt, who in three previous seasons on the PGA Tour hadn’t finished better than 100th on the FedEx Cup point list before his breakthrough on Sunday at the Quicken Loans National, are unexpected and unpredictable. They are also why sports are so entertaining. - Rex Hoggard