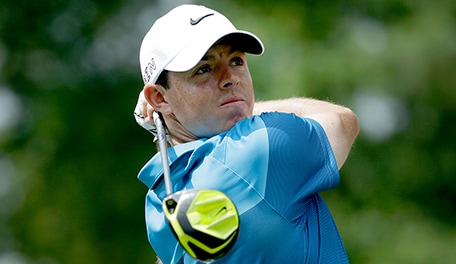 Each week, GolfChannel.com takes a look back at the week in golf. In this edition of After Further Review, our writers weigh in on Rory's ankle, Shane Lowry's great escapes and Jim Furyk's wasted opportunity.

World No. 1 Rory McIlroy told Golf Channel's Todd Lewis Sunday that his left ankle is a "non-issue" and that's great news for golf fans heading into the final major of the season. McIlroy's return from a ruptured ligament sets the stage for a huge week at Whistling Straits as he looks to defend his title and No. 1 ranking from Jordan Spieth. Spieth will try to make history by winning his third major of the season. Plus, so many top players – Bubba Watson, Justin Rose, Rickie Fowler, Jason Day just to name a few – are peaking at the right time. And wouldn't it be incredible if Tiger Woods jumps back in the discussion with a run at major No. 15? We have three more days to debate all the possibilities. – Ryan Reiterman

Shane Lowry out Bubba'd Bubba Sunday at Firestone. Yes, it wasn't the Masters, wasn't a massive hook out of the woods to win a major in a playoff, but Lowry's great escapes at the 10th and 18th holes winning the WGC-Bridgestone were classic shotmaking. His escapes conjured images of Seve Ballesteros and Arnold Palmer at their best and reminded us that imagination and creative flair are alive and well even without Balata balls. – Randall Mell

Rest assured, this was not a replay from 2012. Jim Furyk did not hand the trophy to Shane Lowry at WGC-Bridgestone Invitational as he did to Keegan Bradley three years ago, but the result for the 45-year-old was still the same. Another 54-hole lead, another wasted opportunity.

Furyk shed a very sizeable monkey in April with his win at the RBC Heritage, ending a victory drought that had reached nearly five years. But he still has an ugly record of faltering from the pole position, failing to convert any of the 10 chances he has had since 2011 when equipped with at least a share of the 54-hole lead.

Furyk will someday be inducted into the Hall of Fame, and this was a situation where Lowry’s bogey-free 66 would have been eclipsed by only a great round from Furyk, given the conditions. But regardless of his credentials, Furyk’s closing ability will continue to be called into question until he finds a way to hoist a trophy after taking a lead into the final round. - Will Gray