After Further Review: Bubba's back after NTO win 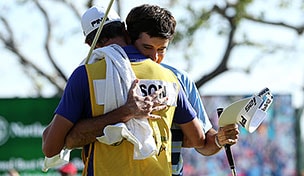 Getty Images
CRANS-MONTANA, SWITZERLAND - JULY 25: Rikard Karlberg of Sweden finds his ball has landed on on golf cart on the sixth hole during the third round of the Omega European Masters at Crans-sur-Sierre Golf Club on July 25, 2015 in Crans-Montana, Switzerland. (Photo by Stuart Franklin/Getty Images)  -

Each week, GolfChannel.com takes a look back at the week in golf. In this edition of After Further Review, our writers weigh in on Bubba Watson's colorful personality, why he's a favorite for the Masters, Sunday's great finish at the Northern Trust Open and the secret to Riviera's greatness.

“The whole year is about rejoicing,” Bubba Watson said late Sunday afternoon. “I’m thinking about how blessed I am to be playing on the PGA Tour.”

Apparently, Bubba forgot the guiding principles for his 2014 when he barked at cellphone-wielding spectators lurking behind tee boxes and fairway rope lines at Riviera.

The emotional and tender Bubba – the guy who chokes up when talking about his wife and young son – is so at odds with the angry and agitated Bubba, the one who occasionally surfaces in stressful situations on the PGA Tour. It stands to reason, then, that many fans can’t decide whether to love or loathe his split personality, but the reality is this: When Bubba wins, so does the PGA Tour. He remains the game’s ultimate character. – Ryan Lavner

Bubba Watson should be one of the early favorites going to the Masters – if not the favorite.

Watson’s victory Sunday at the Northern Trust Open was impressive in how he dissected historic Riviera. He didn’t just overpower this classic layout, which was set up firmer and faster than long-time observers have ever seen it.

Watson led the field in driving distance, but he was also eighth in driving accuracy. His towering iron shots helped him finish third in greens in regulation. He was seventh in total putting on Riviera's slick greens.

That’s a terrific formula to win at Augusta National. Watson’s game looked dialed in perfectly to help him make a run at winning another green jacket. Now, if he can just keep his game dialed in for another eight weeks. – Randall Mell

In the ultimate analysis of this week’s Northern Trust Open, one is saddled with the unmistakable reality that everything about Los Angeles’ annual PGA Tour stop is top notch other than the tee sheet.

And this just isn’t about Tiger Woods’ yearly pass on his hometown event. Although the world No. 1 has not played the Northern Trust Open since 2006, the same could be said for Phil Mickelson, who passed on the event for the first time since ’06, and world No. 2 Adam Scott, and No. 3 Henrik Stenson. You get the idea. The point is Los Angeles deserves better. – Rex Hoggard

There are plenty of ways to rate a course as “great,” but my personal checklist begins with its inclusionary characteristics.

When a tournament is held there, does it offer a level playing field for all types of competitors? In other words, can anyone win there?

At Riviera this weekend, the list of contenders included Masters champions and a Monday qualifier, phenoms and journeymen, big bombers and peashooters, drawers and faders, ball-strikers and rock-rollers.

It was like the Statue of Liberty of golf tournaments: “Give me your tired, your poor, your huddled masses yearning to breathe free ...”

Not many tracks can be this democratic, instead offering better chances to a single category of player. It shouldn’t come as any surprise, but the leaderboard at Riviera once again proved that the venerable course is among the best of the bunch on the PGA Tour schedule. – Jason Sobel