After Further Review: Day proves he belongs on major stage 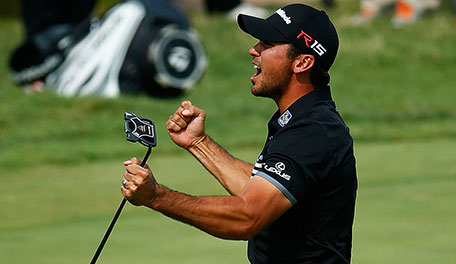 Each week, GolfChannel.com takes a look back at the week in golf. In this edition of After Further Review, our writers weigh in on Jason Day's major breakthrough at the PGA Championship, Jordan Spieth's "easy loss" and Rory McIlroy's successful return from injury.

There are no loss causes in golf. Simply consider Jason Day as your paradigm of hope to prove that point. After various near misses and miscues at major championships, most recently at the Open Championship and June’s U.S. Open, Day delivered a commanding performance, outdueling Jordan Spieth, the game’s hottest player right now and the current world No. 1, to win the PGA Championship by three strokes. There were times when some, maybe even Day himself, wondered if the Australian had what it took to finish on the game’s biggest stage. For Day there’s no need to wonder any longer, and others may be able to worry a little less. – Rex Hoggard

Jordan Spieth knows how to win, and he knows how to lose. He showed a lot of class watching Jason Day beat him Sunday at the PGA Championship. Spieth could have taken it hard, losing out on a chance to make history with a third major championship victory this season, but he knew the moment was bigger than him. He was gracious recognizing Day’s superior play. “It’s the easiest loss I’ve ever had.” – Randall Mell

Rory McIlroy is the second-best player in the world. It’s now official. McIlroy said he felt fine physically, coming back from rupturing a ligament in his left ankle, and there was no evidence to disprove that this week. He now needs to get his game in shape to compete with the likes of new No. 1 Jordan Spieth and new major champion Jason Day. When he does – and he will – we’re in for some special times. Spieth claiming No. 1 was good for the game. McIlroy motivated to get it back will make it even better. – Mercer Baggs

Jason Day has endured more major heartbreak than any extravagantly talented player ever should, so it was a relief to see him break through and win his first major Sunday at Whistling Straits. When healthy, the Aussie has proven to be one of the game’s elite talents, but he’s had his share of hard knocks in the majors, from leading late at Augusta to dealing with vertigo at Chambers Bay to leaving his birdie putt on the 72nd hole at St. Andrews dead in the jar. That he was able to dust himself off from all of those near-misses is a testament to his doggedness. Good for him. – Ryan Lavner