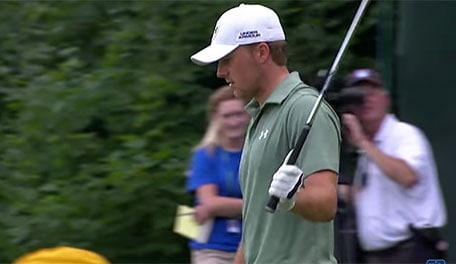 Each week, GolfChannel.com takes a look back at the week in golf. In this edition of After Further Review, our writers weigh in on a similarity between Jordan Spieth and Tiger Woods, the continuing development of Rickie Fowler and the question of just how many world-class women golfers there are in South Korea, anyway.

One thing struck me about Spieth's performance on Sunday, when he muddled through his first 12 holes in 1 over par, with three bogeys and two birdies. Putts weren't dropping. Approaches weren't covering the flag. I figured it was just that old saw, "The toughest thing to do in golf is to follow up a really low round with something similar" at work. But then Spieth awakened. he birdied four of his last six holes and, improbably, got himself into a playoff. Which he won.

Spieth didn't have his A-game for most of the round, but he was able to summon it when he needed it. That's something Woods used to do in his prime. Some will say that Spieth wasn't exactly facing A-competition, but the answer to that is this: When you have to sink a 20-foot putt to keep your chances alive, the ball doesn't know it's "only" Tom Gillis you're trying to catch. It just knows it has to find the bottom of the cup. And for special players, it does more often than not. - Al Tays

Winning begets winning. There’s no way to know if Rickie Fowler would have won the Scottish Open without his playoff victory at The Players Championship two months ago, but the two results certainly looked rather familiar. With his back against the wall at Gullane, Fowler rattled off three birdies across his final four holes, including a kick-in on the final green to race past Matt Kuchar.

Fowler was already a player to watch at St. Andrews, and equipped with a career-best world ranking he will certainly be on a number of short lists. His game continues to evolve and improve at an elite level, but the intangible momentum he has derived from winning two trophies this summer can’t be overstated.

For so long, the knock on Fowler was that he didn’t have the hardware to back up the hype. With that notion now a thing of the past, expect his trophy collection to continue to grow. - Will Gray

Add In Gee Chun to the remarkable wave of young South Koreans storming the women’s game. Chun won the U.S. Women’s Open Sunday with a record-tying 72-hole score, equaling the 272 score set by Juli Inkster at Old Waverly in 1999 and Annika Sorenstam at Pine Needles in 1996. This year’s LPGA’s rookie class is the strongest ever, in great part because Hyo Joo Kim, Sei Young Kim, Ha Na Jang and Q Baek were proven stars in South Korea before they joined the American-based tour. Kim won the Evian Championship late last year before she even joined the American tour. Chun isn’t an LPGA member yet, but she will follow Hyo Joo Kim’s lead. We’ll just have to wait to see if Chun joins the LPGA this year or next. This gifted young player will add to an international tour that’s deeper than it has ever been and will make winning on the LPGA tougher than it has ever been. - Randall Mell