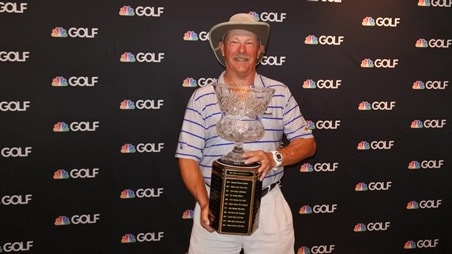 Indeed, he went into the final round played on the Island Course at Innisbrook Rersort leading by two and won by two, despite making two triple bogeys. His first came on the ninth hole; his second on the par-5 15th when he had a lost ball. Neither bad hole deterred him.

"I just tried not to make it any worse," White said. "Take your medicine and try to make it up later."

White admitted he actually might have been a little nervous when he started the tournament. On his first nine holes of the tournament on the difficult Copperhead Course at Innisbrook, he shot 49. But then he settled down to shoot 40 on the back nine.

"After that I was relaxed, paired with good people and I just had a good time," White said.

He also might have had a sign on the back nine that things were about to improve. On the 11th hole, while helping a fellow competitor look for a ball, a duck nudged him.

"I gave him some peanut butter crackers to help him along the way, and I guess he paid me back by letting me birdie 11," White said.

A decade ago, White played in his first nationals, which was also at Innisbrook. To win it here was special, he said.

"I always like it down here," he said. "The atmosphere in Innisbrook is different than anywhere else. I like the resort; the people here are just great. I come here any chance I get."