Am Tour: Senior contenders share their keys to success 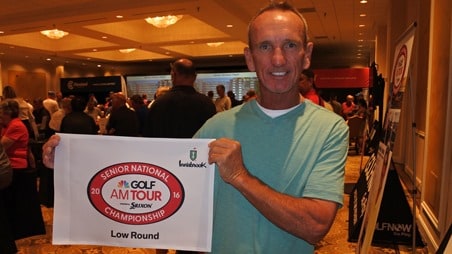 PALM HARBOR, Fla. -- It's been about a decade between Am Tour nationals for Robert Corbello, a business owner in Vidor, Texas. In fact, the last time he played in nationals, it was here at Innisbrook Resort, and there was a cut (pre Golf Channel). Those who didn't make the cut got a free round on the Island Course.

"I took the free round," said Corbello.

How things have changed.

Corbello, who is the Senior Palmer Flight (4-7.9 handicap) at this week's Golf Channel Am Tour Senior Nationals, leads by four strokes after two rounds (76-73-149). He has played a lot of tournament golf in the last decade, caddied for good players and observed the pros. He stays in shape, and he's a student of the game. Off and on the course, he's one of the most cordial people you'll ever encounter, but he might seem a little quiet during tournament golf.

"I love to chat," said Corbello, "but not on the golf course. You don't see the pros do that too much."

In other words, it's all part of what Corbello does to stay in the moment on the golf course, to focus on the task at hand, to keep it one shot at a time.

On Tuesday, he played Innisbrook Resort's Copperhead Course, home of the PGA Tour's Valspar Championship, which he negotiated at 1-over-par. The toughest part of the course is a finishing stretch called the Snakepit, and it starts on the 16th. Corbello, who is normally very mild-mannered, parred those three holes and punctuated it with a fist pump.

Besides staying within himself, Corbello also focuses on tempo and staying relaxed, a common theme among those who are doing well this week. But everyone has their own tricks.

One of the ways Chris Barnett of Acworth, Ga., near Atlanta deals with tension is through his sense of humor. Barnett, who refers to himself as a "redneck with sticks," is currently third in the Championship Flight (0-3.9 handicap), despite making a triple bogey on the par-5 15th hole at Fox Hollow Golf Club after hitting two balls in the water.

In all seriousness, though, the key is to put your bad holes behind you. Barnett, who owns a plumbing company, came right back to par his next three holes.

"It's over. There's nothing you can do about it," said Barnett, who has played in 22 events this year.

"I just really try to stay calm," said White, a retired chief engineer for an oil company. "And it the people you're playing with really make a difference."

White, who is from Monroe, Louisiana and plays on the Dallas and Houston tours as well as his Louisiana tour, said his group on Tuesday was easy-going. One of the competitors had a particularly bad day, White said, but he never let that vibe rub off on him. In fact, White said he encouraged him throughout the round.

"We had a great group, very civil. There was a lot of cooperation," White said. "Most of the time it's like that, really good people." 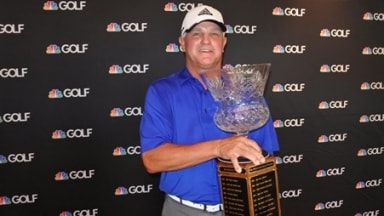 This year, Terry Rice is feeling a whole lot better, thanks in large part to successful back surgery and the euphoria of winning his first national championship in the Golf Channel Am Tour Championship flight.