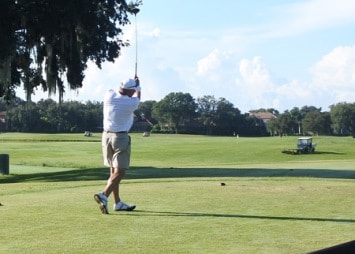 It was hot and steamy, but at the end of the day, there were few complaints about the weather from the nearly 600 competitors in the 2016 Golf Channel Am Tour Senior National Championships after the first round of competition. Most of the players, even if they didn't have a good round on Monday, were just happy to be here.

The reason? It's unlike anything most golfers ever experience. Dwayne Bodrick of New Albany, Ohio just outside of Columbus, was soaking up every bit of it.

"It's the relationships you get to make with new people," said Bodrick, who is making his first appearance at nationals. "I've already made so many new friends, from places like Jacksonsville, Chicago and Palm Springs.

"And it's the hospitality. It's fantastic. You're treated like royalty." .

Of course, there's the competition side of it, too, and Bodrick has embraced that. He finished his first day with an 89 on the difficult Copperhead Course at Innisbrook. His round left him tied for 22nd in the Sarazen Flight (12-15.9 handicap) after Day 1. But even after a good showing, he took advantage of the opportunity later that night to get a few golf tips from the Golf Channel's Martin Hall, who heads up the School of Golf.

"Where else can you get help with your golf game from experts like Martin Hall?" Bodrick asked.

One of Martin's suggestions was a slight grip change for Bodrick, but added that he shouldn't try that until after the tournament. After all, no need to think about new things in the middle of heated competition. It can be nerve-wracking as it is.

But that's one of the aspects of this four-round mega event that the competitors like. Howard Crossan, for example, misses his days as a soccer player at the University of South Carolina. Golf on the Am Tour gives him a chance to keep his competitive juices flowing.

For Crossan, who is playing in the Senior Snead Flight (20 handicap and above) this year's event is his fifth time going to Nationals. Bodrick is a first-timer, and so is Steve Cain, an attorney from Upper Marlboro, Md. For Cain, the pursuit of Nationals was the perfect excuse to work on his game this year and he's loved everything about the competition – both on the local level and national level.

"When you get to be our age there are only so many things that give you a rush," said Cain, who on Monday fired a 99, good enough for T-53 in the Senior Jones Flight (16-19.9) "Here's a chance to play by the rules where every shot counts, where you get nervous. It's definitely a rush." 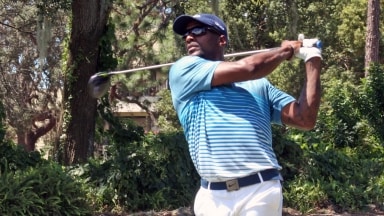 Two former pro athletes, Jordan Babineaux and Desmond Figgins, have rekindled their competitive spirit on the Golf Channel Am Tour in 2016.