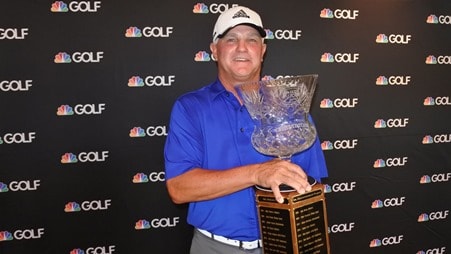 A year ago this time, Terry Rice was preparing for back surgery. The pain after every round of golf had become unbearable.

This year, Rice is feeling a whole lot better, thanks in large part to successful back surgery and the euphoria of winning his first national championship in the Golf Channel Am Tour Championship flight.

Rice, who lives in Midland, Texas, fired a final-round 76 Thursday on the difficult Copperhead Course at Innisbrook Resort & Spa to hold off Joe Lefavor of Crownsville, Md., by two strokes. Lefavor, who was playing in the group in front of Rice, shot 73 on Thursday as Rice survived the last three holes, better known as the Snakepit.

Rice said his Adrenalin was flowing when he hit his tee shot through the fairway on the difficult dogleg right 16th, chipped out, then hit a wedge over the green and wound up with double bogey.

Fortunately, he knew he had a cushion over the players in his group, having made birdie two holes earlier on the par-3 14th to open up a five-shot lead. But he didn't know what was going on in front of them.

On 17, he missed a short par putt, and decided to do something to settle him down on the 18th.

"I don't really get nervous anymore – used to a long time ago – more or less just Adrenalin," Rice said. "So I got out of the cart and walked 18 to calm down, and I hit two great shots to make par. Left the birdie putt right on the lip."

Rice has been playing on the Am Tour since 2008 and has played in nationals every year. He finished in the top five three times in the Open division nationals.

This year the 54-year-old Rice won twice and finished as runner-up five times. He's also been relatively pain free after going through back surgery literally the next morning after last year's national championship at PGA West in La Quinta, Calif.

"I felt pretty confident coming in," said Rice, who owns a rental equipment company. "I don't get to practice as much as I would like (because of injuries, some of them stemming from his high school football playing days at Texas powerhouse Odessa Permian.)"

A month before this year's Senior Nationals, Rice came in to watch a Texas Rangers-Tampa Bay Rays game and play all the courses in the rotation, so he knew the courses. And his game was coming along, too.

The best part of his game?

"It's my driver," he said. "I don't hit it long, but I hit it straight. And my putting. If I can get some looks, I can make some birdies." 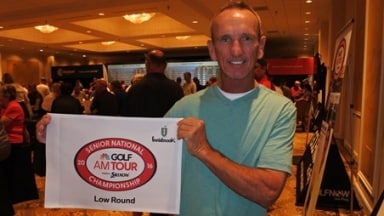 What does it take to find success on the Golf Channel Amateur Tour? Some of the senior contenders share their best secrets.