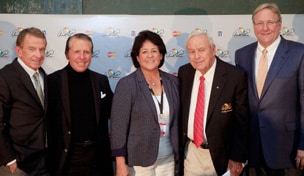 PHOENIX – The World Golf Hall of Fame is opening a new door to the most accomplished women in the game.

Laura Davies, two points short of qualifying for the LPGA Hall of Fame, will become immediately eligible for the World Golf Hall of Fame’s next induction class in 2015.

Dottie Pepper and Meg Mallon, both of whom fell short of the points required for LPGA induction, also will become immediately eligible for the World Golf Hall of Fame.

Lorena Ochoa will become eligible in 2017. While Ochoa surpassed the LPGA Hall of Fame points requirements, she fell short of its requirement that Hall of Famers be active LPGA members for at least 10 years. Ochoa retired at 28 in her eighth year on tour. A player becomes eligible for World Golf Hall of Fame induction at age 40, or five years after retirement.

The LPGA’s Hall of Fame requires members to earn 27 points for induction. A player gets a single point for an LPGA victory and two points for a major championship victory. A player also gets one point for winning the Vare Trophy and one point for the Rolex Player of the Year Award. Players who do not meet those requirements can still be inducted via the Veteran's Committee.

The new World Golf Hall of Fame’s criteria only require a woman to have 15 victories on tours that receive Rolex World Rankings points, or to have won two major championships, to be eligible for induction. A player meeting that criteria, however, must still pass a vote of the World Golf Hall of Fame Selection Commission to be inducted.

The LPGA will continue to use its 27-point system for its Hall of Fame.

“The LPGA is fully supportive of the World Golf Hall of Fame’s introduction of the Female Competitor Category,” according to an LPGA statement. “This Category will give more women the opportunity to have their careers fully reviewed throughout the selection process, with the hope of enabling more women to be globally recognized for their tremendous accomplishments and impact on the game.

“While supporting and recognizing the game’s contributors through the World Golf Hall of Fame, the LPGA will continue to honor those players who achieve the incredible accomplishment of 27 points [under its current point system] with automatic induction into the LPGA Hall of Fame.”

“This is great for women’s golf,” Sorenstam said in a statement. “More women will be debated, discussed, which ultimately will give the women more recognition.”

Notably, Cristie Kerr, 36, Suzann Pettersen, 32, and Yani Tseng, 25, have all met the minimum victory requirements for World Golf Hall of Fame eligibility but won’t become eligible until they reach 40 years old or retire and wait five years to become eligible.