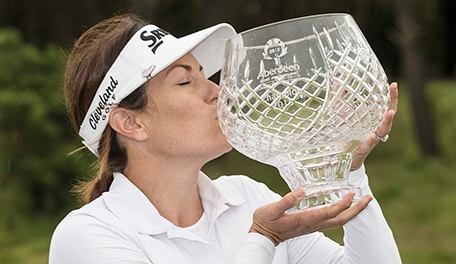 Australia’s Rebecca Artis swept through blustery winds and drizzling rain Sunday to snare the big prize away from Suzann Pettersen and Lydia Ko at the Ladies Scottish Open.

With Pettersen going for a wire-to-wire victory, Artis charged from six shots back in the final round to win at Dundonald Links in North Ayrshire. With an impressive round of 6-under-par 66, three shots better than the day’s next best round, Artis claimed her second Ladies European Tour title.

“Sometimes you fight all your life to try and get that first win and sometimes the second win is maybe even harder,” said Artis, 26, who won her first LET title two seasons ago.

Artis posted one of just two rounds in the 60s on Sunday.

“It was not on the easy side,” Pettersen said. “For Artis to shoot 66, she definitely deserves to win.”

The LPGA and LET move to Trump Turnberry this week for the Ricoh Women’s British Open.