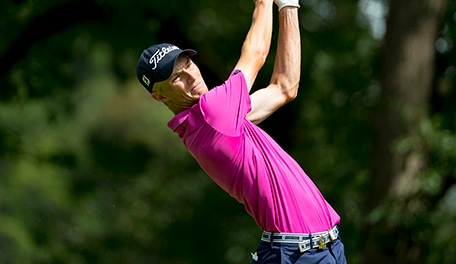 OLYMPIA FIELDS, Ill. – The worst break Will Zalatoris got this summer had nothing to do with a bad bounce, draw or shot.

No, it started when the Wake Forest sophomore experienced severe pain in his abdomen on Monday of Byron Nelson week, in late May.

The ensuing surgery for an emergency appendectomy required a four- to six-week recovery. That knocked him out of not just his second PGA Tour event, but also the U.S. Open sectional qualifier, the Texas State Open, the British Amateur, a Web.com Tour event and a handful of other amateur tournaments – all important bullet points on his Walker Cup résumé.

Zalatoris tried to rush back in four weeks, for his title defense at the Trans-Miss Amateur, but it was too soon. Same for the Southern Amateur, when he was hurting on every swing. He didn’t begin to feel better until a top-five finish against a loaded field at the Pacific Coast Amateur, and this week’s U.S. Amateur at Olympia Fields was the first time since May that he was hitting his shots the proper distance.

“It was just a giant buildup,” he said Thursday. “I’m getting better week to week.”

Alas, it might be a few weeks too late for his Walker Cup chances.

If healthy this summer, Zalatoris would have been a strong contender for one of the final spots. He was one of the nation’s best freshmen in 2014-15, winning once, never placing outside the top 25 and finishing the season ranked 20th.

“I’m excited for where my game is headed,” he said. “Everything is starting to really click.”

What was likely his 11th-hour bid to make the team ended Thursday, when he lost to Walker Cupper Hunter Stewart, 3 and 1, in the Round of 32 at the U.S. Amateur.

The match turned on the 12th hole, when Zalatoris got fooled by the wind on the green and the match returned to all square.

“I finally felt like I had some momentum,” Stewart would say later.

Zalatoris couldn’t convert a birdie putt on 13 after hitting the flag with his approach, and then he missed a 10-footer on 14 to trail by one hole.

Stewart, the fifth-ranked amateur in the world who dispatched fellow Walker Cup teammate Lee McCoy in the Round of 64, didn’t miss a shot over the final four holes to close out the match, including two bullets with long irons on brutal, into-the-wind par 3s.

“That’s what you have to expect out of a guy like that,” Zalatoris said. “He’s such a good player.”

Now, the Walker Cup selection committee likely will decide between the eventual U.S. Amateur winner (provided he is an American and not oalready n the team), Denny McCarthy, Matt NeSmith, Aaron Wise and Zalatoris, a decision that could have been even more difficult if not for Zalatoris’ surgery.

“It kinda hurts, especially with the rough timing, but it’s given me good perspective,” he said. “Sometimes you just feel like you’re lacking motivation or it’s easy to be complacent, but for me it was a great learning experience to be out. It was a tough stretch to miss, but I couldn’t have asked for a better thing to happen.”