Baker-Finch on Tiger: 'Something is not right' 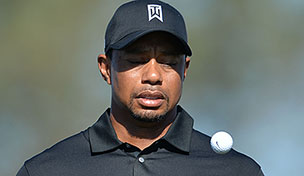 Tiger Woods’ worst-ever start as a pro has left some breathlessly searching for answers as to what’s wrong with the world No. 1.

Ian Baker-Finch believes he has a solution: The former major winner and current CBS Sports analyst said in an interview with Reuters that Woods should clear his mind by playing golf alone for a month to find his swing.

“I think he needs to go away and play golf every day for a month by himself and figure it out, because it’s obviously not working, whatever he’s trying to do,” Baker-Finch said, according to the report. “He doesn’t look in sync to me. His swing and his body aren’t matching up.”

Baker-Finch said Woods often blames his putting for poor performances, when it’s his long game that is letting him down.

“It’s obvious something is not right,” Baker-Finch said in the interview. “He might go win Bay Hill by 10 shots again and two or three others on courses where he feels comfortable, but there was a time a decade or so ago when he was top-3 every time he played. … Don’t get me wrong, I think he’s still capable of being No. 1 in the world for another five years, but it’s not the same Tiger we saw from 1999 to 2007.”

As for which player might supplant Woods at the top of the world order? Baker-Finch offered No. 2 Adam Scott, whom he described as having “no flaws.”

“Adam (Scott) possesses a magical swing and a natural ability and flair and he’s quite possibly the best driver in the game,” Baker-Finch said. “He has no flaws. He’s quite capable of overtaking Tiger this year. All the stars are aligned seemingly. Who apart from Adam is going to be No. 1 at the end of the year.”

Woods, who finished 80th and 41st in his first two starts, respectively, will return to action at the Honda Classic later this month.