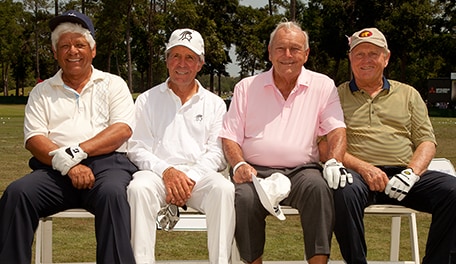 In the vein of Chambers Bay, which was designed with the U.S. Open in mind and with consultation from the USGA, Justice, who is also running for governor in West Virginia, aims to build a course near The Greenbrier property in the Allegheny mountains.

Ground is scheduled to be broken in the next 30 days with the intent of opening the course in Fall 2016.

“Why not have the U.S. Open in West Virginia?” Justice asked in a detailed piece from the Charleston Gazette. “How could the USGA, how could they turn their back on these four icons, their course? ... We can do these things in West Virginia.”

Per the Gazette, Nicklaus initially balked at the idea when first approached. “His first reaction was, 'No way,'" Justice said. "He said, 'It can’t be done.' He said, 'We’ve never done that before,' and he said, 'There’s no way it can be done.'”

Justice then reached out to Palmer and Player and now all four men have agreed to take part in the project.

As for their ties to the resort, Nicklaus designed the Greenbrier course that hosted the 1979 Ryder Cup while Trevino recently took over for Tom Watson as the pro emeritus.

Player, separately and somewhat ironically given the timing, was plenty pointed about his own views on course architecture this last weekend in a scathing critique of another site built to attract the national championship - the aforementioned Chambers Bay.