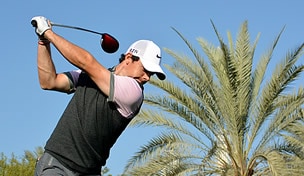 DUBAI, United Arab Emirates – It was a little more than a year ago that Rory McIlroy was introduced as the newest member of the Nike Golf staff at an event that felt more like a rock concert than an endorsement announcement.

Over the next few months things didn’t go to script. He missed the cut in his first event in Abu Dhabi, was bounced in the first round of the WGC-Accenture Match Play Championship and walked off the golf course with a “toothache” at the Honda Classic.

Another missed cut at the Open Championship marked the low point of the Ulsterman’s year.

“I wasn’t playing well, missed the cut, just wasn’t feeling very good about my game at all,” he said on Wednesday at the Dubai Desert Classic.

The turnaround came late in the fall after he failed to advance to the Tour Championship and he had the dubious advantage of four weeks off to work with swing coach Michael Bannon.

“I did a lot of good work with Michael and sort of found a couple of little keys and went with it to Asia,” McIlroy said.

His climb back has been almost as distinctive as his freefall.

He tied for second at an event in Korea, posted top-10 finishes at the WGC-HSBC Champions and DP World Tour Championship and out-dueled Adam Scott on Sunday at the Australian Open for his lone victory of 2013.

Two weeks ago down the road in Abu Dhabi he seemed to pick up where he left off, finishing second at the HSBC Golf Championship and returns this week to the site of his first European Tour victory at Emirates Golf Club.

“It was good to get the win (in Australia) and build some momentum and feel like I’ve carried it through,” said McIlroy, who has been in the United Arab Emirates practicing and preparing since Jan. 3. “If feels good.”