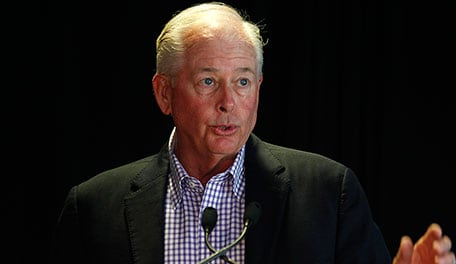 As if an overtime finish at The Players Championship wasn't exciting enough, former PGA of America president Ted Bishop decided to liven things up Sunday with another ill-fated foray into social media.

There are two points of context to keep in mind. First, Bishop lost his position as president last year because he went on a social media rant against Ian Poulter, calling the Englishman a "Lil Girl" because of comments Poulter made in his autobiography. Second, Poulter and Rickie Fowler were both labeled as the "most overrated" players on the PGA Tour in an anonymous player poll conducted by Sports Illustrated and released earlier this week.

As Fowler finished off a playoff victory over Kevin Kisner and Sergio Garcia at TPC Sawgrass, Bishop took to Twitter to lob a thinly-veiled shot at his old nemesis:

Rickie Fowler - the legend is made. Only one over rated player left.......

Poulter, who tied for 30th this week on the Stadium Course, took little time to respond.

Oh Ted Ted Ted..... I thought you learnt you lesson the last time. Obviously not. https://t.co/RgcUmGHfsM

Poulter then tweeted this:

I guess @tedbishop38pga is still confused. I should have replied to this message the way I wanted to. pic.twitter.com/pHiHh1NNvT