The Ryder Cup is still 16 months away, but European captain Thomas Bjorn is already making moves.

Bjorn took over the reins for the European team in December, and Wednesday he announced that Sweden's Robert Karlsson will be the first assistant captain added to the team.

Karlsson, 47, has won 11 times on the European Tour. He became the first Swede to win the European Tour's Order of Merit in 2008, a career year in which he won twice, recorded top-10 finishes in three majors and reached as high as No. 6 in the world rankings. He represented Europe at both the 2006 and 2008 Ryder Cup, compiling a 1-2-4 individual record.

"(Karlsson) has been one of my closest friends on Tour for many years and, not only that, he is immensely respected by all the players, both his peers and the younger guys now emerging," Bjorn said. "His playing credentials are impressive, having been a former European No. 1, and he also knows the unique atmosphere of the Ryder Cup, having represented Europe both home and away."

Karlsson's most recent victory came at the 2010 Dubai World Championship. He lost playoffs at the PGA Tour's FedEx St. Jude Classic in successive years, first to Lee Westwood in 2010 and again to Harrison Frazar in 2011. Karlsson missed the cut last week at the BMW PGA Championship and is in the field this week for the Nordea Masters in his native Sweden.

"To get the call from Thomas was very special and I'm really looking forward to being part of the Ryder Cup again," Karlsson said. "It is a great honor to be a vice captain and I'm very much looking forward to the next 16 months." 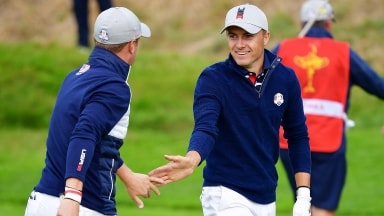