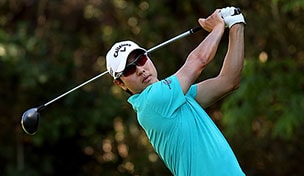 Getty Images
ST ANDREWS, SCOTLAND - JULY 15: Peter Dawson, Chief Executive of the R&A speaks during a press conference ahead of the 144th Open Championship at The Old Course on July 15, 2015 in St Andrews, Scotland. (Photo by Mike Ehrmann/Getty Images)  -

For the second year in a row, Sang-Moon Bae finds his name atop the leaderboard at the midway point of the Northern Trust Open. Here's how things look after the second round at Riviera, where Bae leads by one shot as he looks to secure a second PGA Tour victory:

What it means: Bae fired a bogey-free 66 Friday to move to the front of the pack, the fifth time in his last six competitive rounds at Riviera that Bae has carded 68 or lower. A winner last season at the HP Byron Nelson Championship, he now looks to find the winner's circle once more on a course where the South Korean clearly feels comfortable.

Round of the day: Jason Allred needed to survive a Monday qualifier to earn a spot in this week's field, but Allred is now making the most of his opportunity. A graduate of nearby Pepperdine, Allred recorded nine birdies en route to a 7-under 64 Friday that moved him to 5 under for the week. Despite being one of the last entries this week, Allred will now enter the weekend inside the top 10 and firmly in contention.

Best of the rest: A winner at Riviera in 2011, Baddeley relied on a hot putter to fire a 6-under 65 during the second round and move within a shot of the lead. The Aussie has struggled somewhat in recent years but has three PGA Tour titles to his credit and ended his round with a flurry, with birdies on each of his last four holes and five of his final six on Friday.

Biggest disappointment: Matt Kuchar began his 2014 campaign with a pair of top-10 finishes in Hawaii, but after a break from action was unable to find his form this week in Los Angeles. Kuchar carded rounds of 74 and 75 at Riviera, missing the cut by several shots. In the process, his streak of 30 consecutive made cuts - the longest active streak on the PGA Tour - came to an abrupt end.

Main storyline heading into Saturday: Bae now knows what it takes to win, but he'll have to fend off a series of contenders over the next 36 holes. Those closest to the lead include Beljan, who lost in a playoff here a year ago, and Johnson, who held the first-round lead and remains in contention after a 1-under 70 on Friday.

Shot of the day: The par-4 10th hole has provided no shortage of difficulties for the field this week at Riviera, but Hunter Mahan had no issues on Friday. Mahan's drive to the 306-yard hole landed near the edge of the green, then the veteran curled in an eagle putt from more than 60 feet.