Bubba moves back to No. 3 in the world 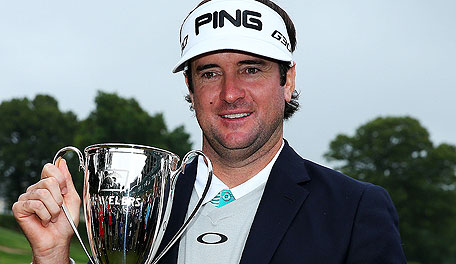 Bubba Watson is back to No. 3 in the Official World Ranking after his win at the Travelers Championship.

Watson had reached as high as No. 2 behind Rory McIlroy before being supplanted by Henrik Stenson in March. He entered last week No. 5 and has been a fixture of the top 10 since his second Masters victory in April of last year.

Across the pond, Pablo Larrazabal jumped from 118th to 69th with his win at the BMW International Open.

Four spots up, Luke Donald didn't make any huge move, going from 68th to 65th, but his world ranking combined with a T-7 finish at the Travelers earned him an invite to the Open Championship over Bo Van Pelt (216th) and Mark Wilson (341st).

And finally in the weekly Tiger Woods watch, the former world No. 1 sat inactive and fell to 220th. The last time he was this far down the rankings was Sept. 21, 1996, the week before his first PGA Tour victory, when he was 221st. He is currently sandwiched between Kazuhiro Yamahsita and Thailand's Thaworn Wiratchant.