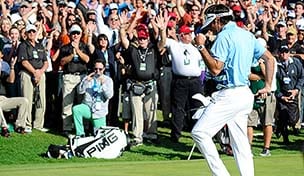 Getty Images
Bubba Watson reacts after missing his put on the seventh hole during round one of the 2015 RBC Canadian Open at Glen Abbey Golf Course on July 23, 2015 in Oakville, Ontario, Canada. (Photo by Minas Panagiotakis/Getty Images)  -

Bubba Watson returned to the winner’s circle Sunday at the Northern Trust Open. A few hours later, he also officially returned to the top 15 in the Official World Golf Ranking.

Watson, who nearly won the Phoenix Open earlier this month, jumped from No. 26 to No. 14 in the latest rankings, released Monday. He shot 64-64 on the weekend at Riviera to win for the first time since the 2012 Masters, when he ascended to No. 4 in the world.

Dustin Johnson settled for another second-place finish at Riviera, but he moved back into the top 10 in the world. The big hitter jumped from No. 11 to No. 8, and it marked his first time inside the top 10 since February 2012. His career-best ranking is fourth, after he won the 2011 Barclays.

Thomas Aiken, who defeated Oliver Fisher to win a playoff at the European Tour’s Africa Open, rose from No. 113 to No. 79 in the world with the victory. Fisher made an even more dramatic leap, going from No. 391 to No. 267.

The biggest move of the week, however, was made by Jason Allred, who parlayed a Monday qualifier spot into a T-3 at Riviera. The journeyman ascended from No. 900 to No. 298. The $388,000 paycheck was more than he has made in his entire Web.com Tour career.

Zach Johnson and Rory McIlroy flip-flopped spots in the OWGR – Nos. 6 and No. 7, respectively – which seemed minor until the bracket for the WGC-Match Play was released. Now, with the fourth No. 1 seed, not the third, McIlroy has a much more difficult road to the semifinals.