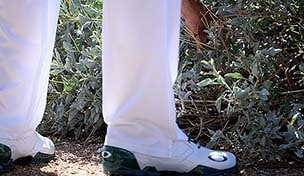 Getty Images
A look at some of the sights behind the scenes of Golf Channel's new show Altered Course.  -

SCOTTSDALE, Ariz. – On the par-5 13th hole Saturday at the Waste Management Phoenix Open, southpaw Bubba Watson pulled his tee shot right and sent it sailing into a desert area, where it eventually settled under a bush. Watson had, shall we say, animal instincts, and called for a ruling.

“It was a burrowing animal,” PGA Tour rules official Jon Brendle said, “and being that he was left-handed and could advance the ball. The club path was going to strike the burrowing animal hole (at impact) and therefore he was entitled to a drop.”

Watson took free relief, proceeded to knock his second shot into the fairway, his third onto the green, and then walked away with a two-putt par.

The 13th at TPC Scottsdale’s Stadium Course is the same hole where Tiger Woods elicited spectator help to move a boulder in the final round of the Phoenix Open in 1999.

Through three rounds, Watson sits at 15 under, two clear of Kevin Stadler.