Byrd (63) making most of sponsor invite at Greenbrier 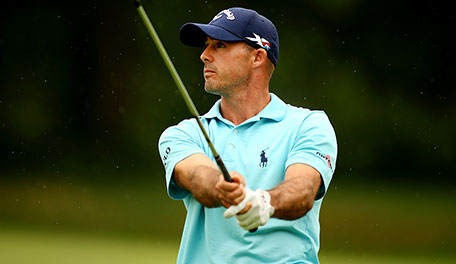 WHITE SULPHUR SPRINGS, W. Va – In the days leading up to The Greenbrier Classic, Jonathan Byrd wasn’t even sure if he’d get a chance to tee it up. Now that he’s in the field, he plans to make the most of his opportunity.

Byrd opened with a bogey-free 63 on the Old White TPC, and at 7 under he sits one shot behind Scott Langley. Byrd has only conditional status this season on the PGA Tour, and he is playing on a sponsor invite after the spot previously allocated to Johnson Wagner opened up once Wagner made the field on his own merit.

“I had my wife traveling by herself with three kids on Monday, and she was all packed and ready to go, waking up that morning on Monday not knowing if I was going to get in the field,” Byrd said. “It was a little tense for her, but once you get to the summer, you have a few withdrawals and I felt pretty comfortable that I was going to get in. But you just never know.”

Byrd had the flat stick working during the opening round, taking only 23 putts in addition to a chip-in on No. 11. He had four birdies across a six-hole stretch on the back nine, capped by a tap-in birdie on the par-3 15th. Byrd explained that it helped to feed off of Langley, his friend and playing partner who made eight birdies of his own in the opening round.

“Momentum is a great thing, and when you see somebody kind of playing well, getting some momentum in their round, it’s playing out in front of me,” he said. “So you go, ‘Hey, I can do that.’”

This season has been a struggle for Byrd, who has made just eight of 16 cuts and hasn’t cracked the top 25 since a T-16 finish at the Puerto Rico Open. But he has an eye on not only ending a victory drought that extends back to the 2011 Hyundai Tournament of Champions, but also snagging one of the four Open Championship bids available to this week’s top finishers.

“Who wouldn’t want to play in the British Open at St. Andrews? That’s enough motivation as it is,” said Byrd, who last played the event in 2012. “If you’ve got a pulse, you want to play in that. But doing it is another thing. You want to block it out of your mind. Probably on Sunday it will be difficult.”