Caddie kicked out of U.S. Women's Open over photos 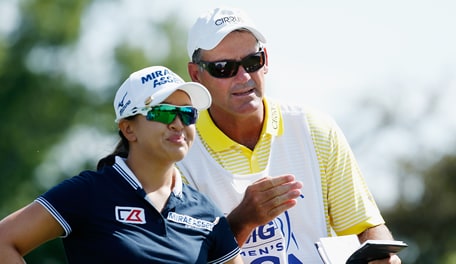 LANCASTER, Pa. – Sei Young Kim’s caddie was “removed” from the U.S. Women’s Open Tuesday morning after he was discovered in the USGA rules office improperly taking cell phone photos of “internal course setup documents,” according to a USGA official.

Paul Fusco was escorted off the property by USGA security at Lancaster Country Club and will not be permitted to caddie for Kim this week.

The USGA official told GolfChannel.com that Fusco was in an area that he was not properly credentialed to have access and that a USGA official discovered Fusco taking cell phone photos of hole locations and setup info for all four rounds, info that wasn’t yet scheduled to be released to players. The USGA doesn’t release hole locations and setup info for each round until the specific morning of that round.

“I was surprised to hear about it,” Kim told GolfChannel.com on the driving range. “It’s upsetting.”

Kim, whose English is limited, said she spoke briefly with Fusco after learning of his removal, but she was uncomfortable saying more. She said she’s hiring Steve “Rubble” Shellard as her new caddie for the week. Shellard is Se Ri Pak’s regular caddie. Pak withdrew last week from the U.S. Women’s Open.

“It’s like seeing a test before you take it,” Kimball told GolfChannel.com.

Fusco told GolfChannel.com that there is more to the story as to why he was in the USGA office, but out of respect for Kim’s bid to win the U.S. Women’s Open he’s reserving comment until the championship is over.

Kim, meanwhile, will not be penalized.

Fusco’s removal sent a buzz through the driving range among players and caddies.

“If it’s true, it’s cheating,” one caddie told GolfChannel.com. “It’s like knowing the questions before you take a math or English test.”

“It makes us all look bad,” the caddie said.

Fusco is an experienced caddie who formerly toted for Vijay Singh and Na Yeon Choi. Fusco has proven a strong ally for Kim, a rookie. Fusco has been on her bag since Q-School last December. He caddied for both of Kim’s LPGA victories this year. As a team, Kim and Fusco also have been a force in the first two majors of the year. She was in the final Sunday pairing at both the ANA Inspiration and KPMG Women’s PGA Championship. She tied for fourth at the ANA and finished second at the KPMG.

While Kim said she looked forward to welcoming Fusco back on her bag in the near future, it’s unclear if he could face discipline from the LPGA.

The LPGA issued this statement: “This being a USGA event and not conducted by the LPGA, we have nothing to add regarding the specifics of the alleged incident. As for future potential discipline or action, we will continue to discuss internally as we gather additional information.”