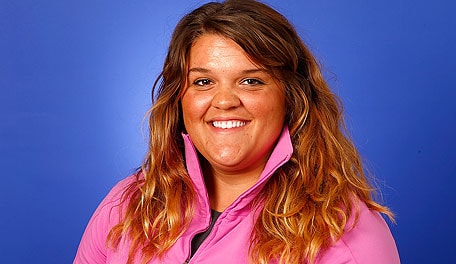 “I had to be in my room, quarantined,” Nagel said. “It was the most bizarre experience of my life.”

Nagel survived thyroid cancer as a junior at Michigan State with the help of radioactive iodine treatment. She also had surgery to remove her thyroid and then underwent year-long special medicinal treatments that helped her completely recover.

So much better she felt like she was glowing in all the right ways Thursday at Lancaster Country Club. In the first round of her first U.S. Women’s Open, Nagel posted a 2-under-par 68, good for a tie for fourth in the morning wave, just two shots off the lead.

“When you hear the cancer word . . . I remember that very second when I was sitting in the doctor's office, and I felt like the whole world just came crashing down around me,” Nagel said. “It kind of brings all this into perspective and makes this even more special.”

It’s been a whirlwind week for Nagel. Though she earned conditional status through LPGA Q-School last December, she has been playing the Symetra Tour this year. She didn’t get into her first LPGA event until two weeks ago. She was a late entry, learning she was in the Walmart NW Arkansas Championship roughly 36 hours before her morning tee time. She flew from the Symetra Tour event she was playing in Michigan to get there in time but didn’t get a practice round. She missed the cut in Arkansas but knew she had a spot in the U.S. Women’s Open after qualifying in the sectional in Wilmette, Ill.

“All of my family is here supporting me,” Nagel said. “I’m happy to be here.”