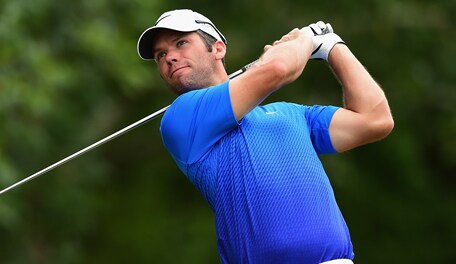 GREENSBORO, N.C. – The Wyndham Championship is Paul Casey’s 20th PGA Tour start this season and the way he’s trending – following a second consecutive 66 – he is far from finished for the year.

By comparison, Casey’s year is a marathon considering he’d never before played more than 17 Tour events in a single season. Most of that scheduling makeover is the byproduct of his decision to forego membership on the European Tour this year, but there is also something to be said for readjusted priorities.

“I’ve never focused over here [PGA Tour]. Isn’t it cool?” he smiled. “I’m really not tired because I’ve practiced less this year than I ever have.”

Casey explained that he took two weeks off after the Open Championship, the first week he spent on vacation followed by a second week cycling in the Italian Alps during which he covered some 360 elevated miles.

The Englishman, who is currently 22nd on the FedEx Cup points list and could move into the top 10 and essentially lock up a start at the Tour Championship with a solid finish this week, said he played just nine holes to prepare for the WGC-Bridge Invitational, where he finished tied for 17th place.

“I was just hoping I was going to get it airborne,” he said of his decision to limit his practice going into Firestone. “There is something quite exhilarating about that and it focuses me. Tell me how many guys didn’t touch a golf club for two solid weeks in the middle of the season? Not many.”