Casey thriving on another Monty-designed course 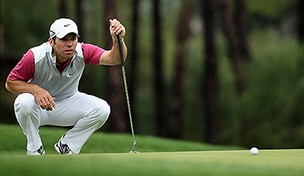 Getty Images
"I couldn't believe it and read it three times. I had heard the PGA was looking at going global, which is a very positive step forward, but I was expecting Asia, not the north coast of Ireland." – Graeme McDowell, on the possibility of having the first international major at Royal Portrush.  -

Casey’s last two European Tour titles came on courses Montgomerie designed, and Casey is off to a promising start on another at the weather-delayed Turkish Airlines Open.

Casey was tied for the lead at 7 under par through 14 holes Thursday on The Montgomerie Maxx Royal golf course in Antalya, Turkey, when play was halted because of darkness.

“I seem to play very well around Monty’s golf courses,” Casey told reporters after play was suspended. “I won in Bahrain a couple of years ago, and then Carton House this year. I do enjoy his golf courses. I have no idea why, but maybe the fact that you can be incredibly aggressive does bode well for me.”

A 12-time European Tour winner once ranked as high as No. 3 in the world, Casey has battled through injuries and struggling form the last few seasons. He dislocated his shoulder snowboarding before the start of the 2012 season. He enters this week No. 97 in the world.