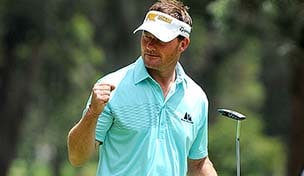 Getty Images
Zach Johnson of the United States holds the Claret Jug after winning the 144th Open Championship at The Old Course during a 4-hole playoff on July 20, 2015 in St Andrews, Scotland. (Photo by Andrew Redington/Getty Images)  -

Alex Cejka was declared the winner Sunday at the weather-plagued Colombia Championship, the season-opening event on the Web.com Tour.

Final-round play was called after a fourth consecutive day of rain in Bogota made the course unplayable. All final-round scores were wiped out and the 54-hole standings were deemed to be official. Cejka won by three strokes at 14-under 199, on the strength of a third-round 63.

Cejka had made the turn in even par before play was called. The final-round wipeout proved a tough break for Andres Gonzales, who was 6 under through 16 holes and all the way up to third place. Now, he’ll record a T-14 finish in the opener.

Other notable finishes this week include Andrew Putnam, who finished alone in second at 11 under. Justin Thomas, a 2013 U.S. Walker Cupper, finished T-5 in his season opener, while former PGA Tour winner Vaughn Taylor was joint eighth.

The next event on the Web.com Tour schedule is the March 6-9 Chile Classic.