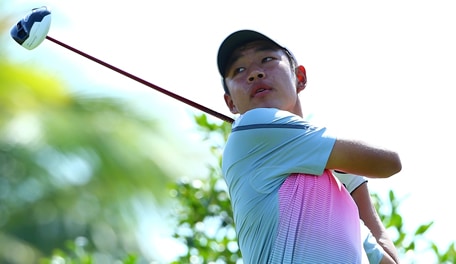 Jin Cheng shot a tournament-record, 8-under 62 to take a two-shot lead Thursday during the first round of the weather-delayed Asia-Pacific Amateur.

Starting on the back side at Clearwater Bay Golf and Country Club in Hong Kong, the 17-year-old from China closed out his opening nine with a birdie and an eagle, then ripped off three birdies in a row to come home in 30.

Cheng has a two-shot lead over Gregory Foo among the early starters. The opening round was suspended Thursday evening because of darkness. Two other players were at 65.

Australians Ryan Ruffels, the highest-ranked amateur in the field, and defending champion Antonio Murdaca each opened with 69.

The winner receives an invitation to next year’s Masters. The champion and runner-up each are exempt into the final stage of qualifying for the Open Championship at Royal Troon.