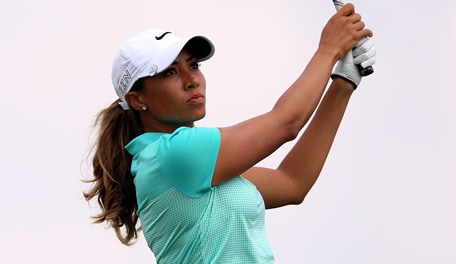 Cheyenne Woods often felt like a “sideshow” when she first began playing golf.

While she confesses she grew up wanting to be like Tiger and that she even loved it when her junior coach called her “Tigress,” she grew wary of being compared to her famous uncle. She says it “got old” as she got older.

These are among the feelings Cheyenne opened up about in a story she wrote for The Players' Tribune, a website featuring first-person stories directly from professional athletes. (Started by Derek Jeter, it's the website that ran Tiger Woods' chiding response to Dan Jenkins' fictional interview with him.) In her writing, she reveals more than she ever has about what it’s been like making her way in a game as Tiger’s niece.

Here’s an excerpt from her article:

Many people assumed (or expected, really) that because I had the genes, my career would follow the same path as his. But the truth was that I had to work my ass off to earn everything I’ve ever accomplished because success didn’t come quite as fast or easily for me as it did for Tiger.

When I first began playing professionally, sometimes the media would almost make me feel like I was there just for show because of my last name. I often felt like I didn’t matter, almost like I was a sideshow instead of an actual player.

When I finally did earn my LPGA Tour card after grinding it out, I felt a tremendous amount of pride in my personal accomplishment, but I was also happy to put the doubters — who thought I was just a name — in their place.

Of course, making it to the LPGA led to increased exposure, which resulted in even more comparisons. I’ve had many interactions with reporters where the only topic of conversation was my uncle. This is hardly surprising because, in the golf world, the main question on everyone’s mind is always, “Who is the next Tiger Woods?” ...

I’d be lying if I said I don’t constantly feel the pressure of that expectation. It’s impossible to ignore. When I was developing my game, I wasn’t dominating. I still haven’t really dominated. And because of that, for a while, I felt like I wasn’t doing well enough. I felt like I could never live up to what people were expecting of me, and that’s difficult to cope with.

Over time, I’ve learned to set my own standard. Everyone has their own journey and their own purpose in life, so I’m finding mine. I think for a 24-year-old, I’m doing pretty well for myself. I don’t know what the future has in store for me, but I know what my goals are, and they aren’t dictated by anyone in this world except myself. It’s exhausting to live your life in terms of comparisons. By doing so, regardless of what you accomplish, you’re never going to appreciate your achievements. I don’t need to be the next Tiger. I just want to become the best version of myself.

Of course, I realize that regardless of what I accomplish in my career, there are probably going to be plenty of people who always consider me “Tiger’s niece.”

I’m very proud to be related to my uncle, but it’s not what defines me as a golfer or a person.

Yes, my last name is Woods — but you can call me Cheyenne.